Stage 5 of the 2022 Dakar Rally brought a maiden win for Toyota Gazoo Racing’s Henk Lategan and co-driver Brett Cummings. The South Africans had an eventful stage, including a problem with the driver’s door and two punctures, but still set the fastest time, besting their nearest competitors by 1min 58sec.

The crew came close to a stage victory during the previous stage, but a broken wheel hub put paid to their efforts, sending them tumbling down the overall order. The pair had arrived in the bivouac at 10pm after Stage 4 and left for the start at Stage 5 just after 6am. Despite the lack of sleep, they pushed hard throughout the stage and reaped the reward of a win. They are still in 35th place in the overall rankings, after losing hours on Stage 1B and again on Stage 4

Stage 5 also saw T Nasser Al Attiyah and Mathieu Baumel maintain their position at the top of the overall standings. They were the first car into Stage 5, having won Stage 4 the previous day. This meant that they had to open the road on a stage where there were no motorbike tracks to aid navigation. When their nearest competitor caught up with them, the Toyota Hilux crew elected to complete the final 62 miles of the stage in company with the other car.

As a result, they restricted their time loss to just 3min and remain in the lead, more than 35min clear of the opposition. With one stage to go before the mid-point of Dakar 2022, they are well-placed in the rally, and they’ll have a good road position (eighth) for Stage 6.

Giniel de Villiers and co-driver Dennis Murphy were handed a five-hour penalty after an incident with a biker on Stage 2 , sending them down the order in the overall standings. The pair continued to push their limits on Stage 5, posting the seventh-fastest time of the day. They recorded a clean run, with no mechanical problems or punctures, but the penalty sees them down in 33rd place in the overall standings.

The stage also brought a good result for Shameer Variawa and Danie Stassen, who had struggled with a run of bad luck earlier in the rally. They started Stage 5 at a good pace, before a puncture slowed them down. A navigational challenge cost them nearly 15min, however, and they finished the stage in 23rd position, 21min 7sec behind Lategan and Cummings. Despite the time loss, their performance was good enough to move them into the top 20 of the rally overall, in 19th place, 3hr 7min behind Al-Attiyah and Baumel.

The bivouac will remain in place near Riyadh for Stage 6 , as well as the upcoming rest day on 8 January. Stage 6 will see the crews complete a liaison of 55 miles prior to the start of the stage, with another liaison of 79.5 miles after the timed section. In between lies a test of 216 miles, incorporating dunes, sandy tracks and a large portion of hard-packed soil.

During the rest day, the technical crews will strip all the race cars, before reassembling them in preparation for the final push towards the finish in Jeddah, on 14 January 14.

“What a day for South African motorsport! We have new stage winners in the form of Henk and Brett, and we are extremely proud of their performance today. They came close yesterday, but today they managed to make a dream come true, despite some setbacks along the way. It was also a good day for Nasser and Mathieu, who managed to retain their overall lead despite opening the road on one of the trickiest stages of the race so far. Giniel and Dennis had a perfectly clean stage and posted an excellent stage time, while Shameer and Danie showed good form to move into the Top 20 in the overall standings.”

“This was a proper Dakar day! It started early in the stage, when my door suddenly opened. I don’t know what happened, but it looks like the latch is gone. I drove holding the door closed with my one hand up until the first decontrol. There, I zip-tied the door closed as best as I could, and set off on the stage again, only to get a puncture. This posed a problem, as I had to clamber out through the co-driver’s door in order to help change the wheel. We set off again, just to get a second puncture later in the stage. This one posed a bigger problem, as the second spare was located under my seat, which meant we had to cut the cable ties to get to the spare. Overall, we expected to lose time on the stage, but when we got to the finish, we heard that we’d posted the fastest time. I couldn’t believe it, but I’m ecstatic to have won my first Dakar stage.”

“We did a good job again today, and Mathieu was simply amazing with his navigation. We were a little cautious in places and decided to drive with Sebastien (Loeb) for the last 62 miles or so. We knew that if we stayed with him, we could restrict our time loss to under three minutes. I’m also very happy with the performance of our Toyota Hilux, which ran perfectly again today. We have a good road position for Stage 6 and I’m hoping to set another good stage time.”

“It was a tough stage, especially in terms of navigation. We started as the sixth car on the road, but soon we were up into third, with just Nasser and Sebastien (Loeb) in front of us. In places we lost their tracks completely and had to pick our own way across the terrain. The middle part of the stage was fast, but navigation again became tricky towards the end. Overall, we had a clean stage with no punctures, and we’re really happy with our result today.”

“We again had a very good start to the stage, but a puncture brought a halt to our progress. Then we struggled to find one of the waypoints and lost nearly 15min hunting for it. But we are here and moving up the leaderboard, so we’ll fight again tomorrow.”

Lategan/Cummings triumph on Stage 5 of Dakar 2022 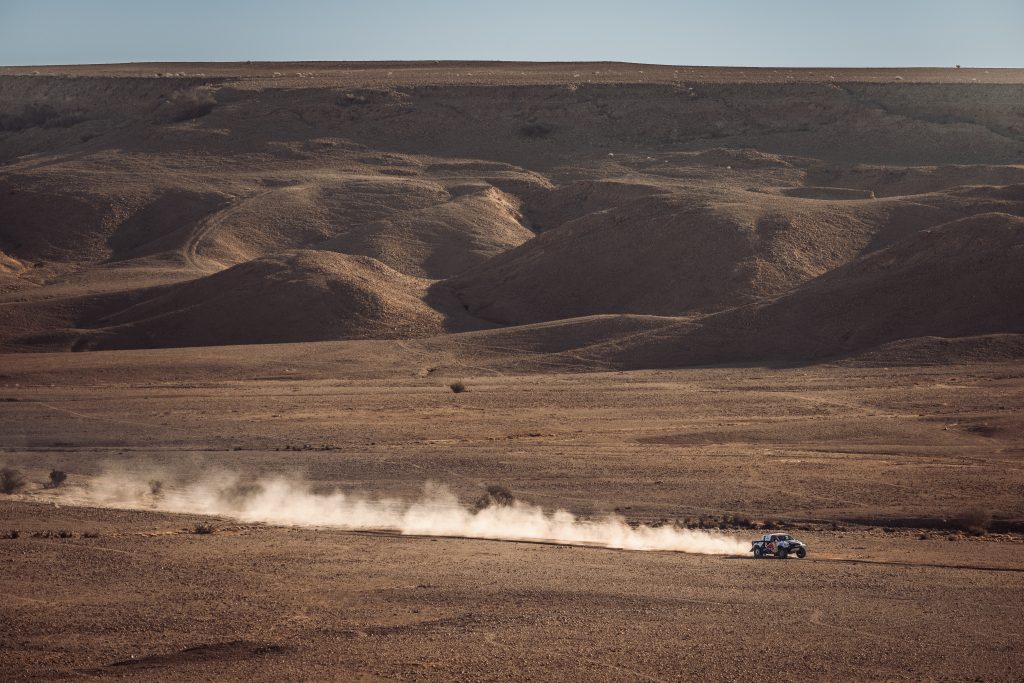 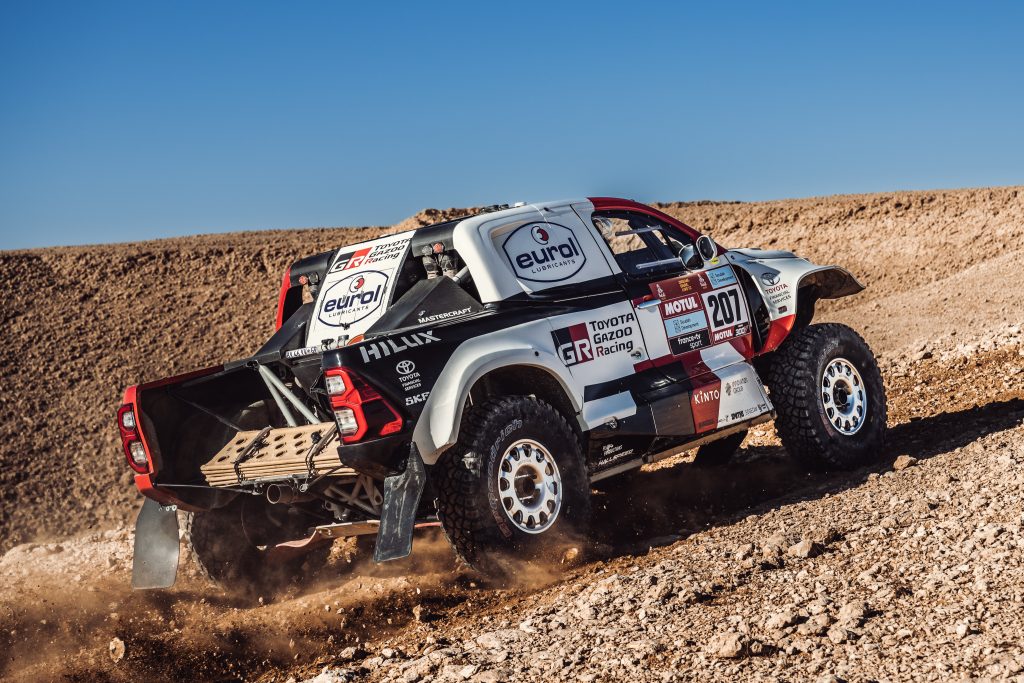 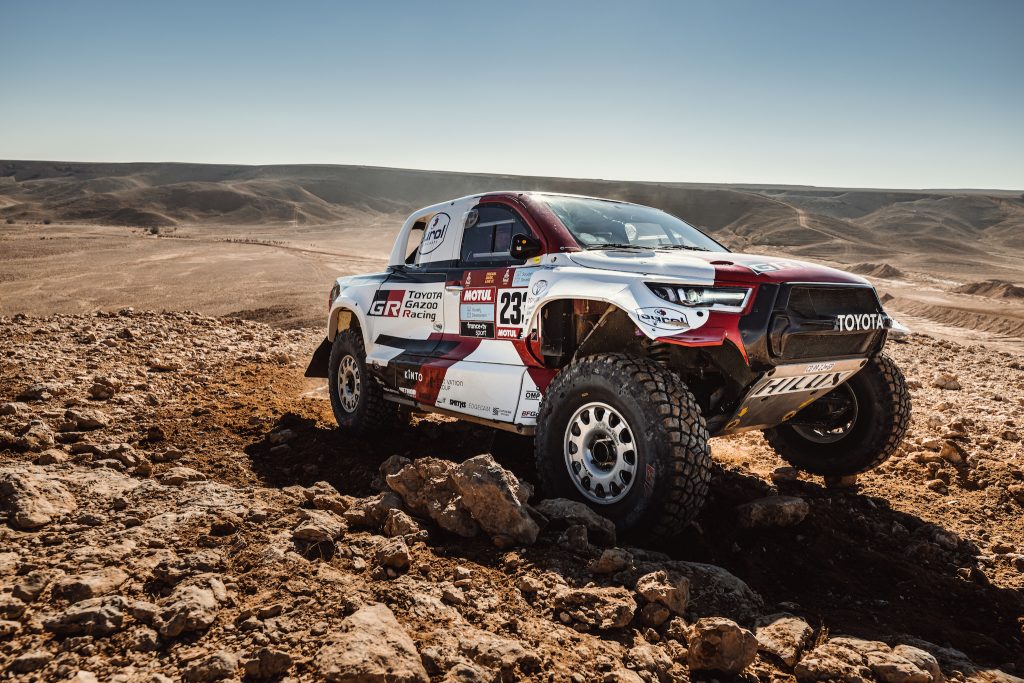 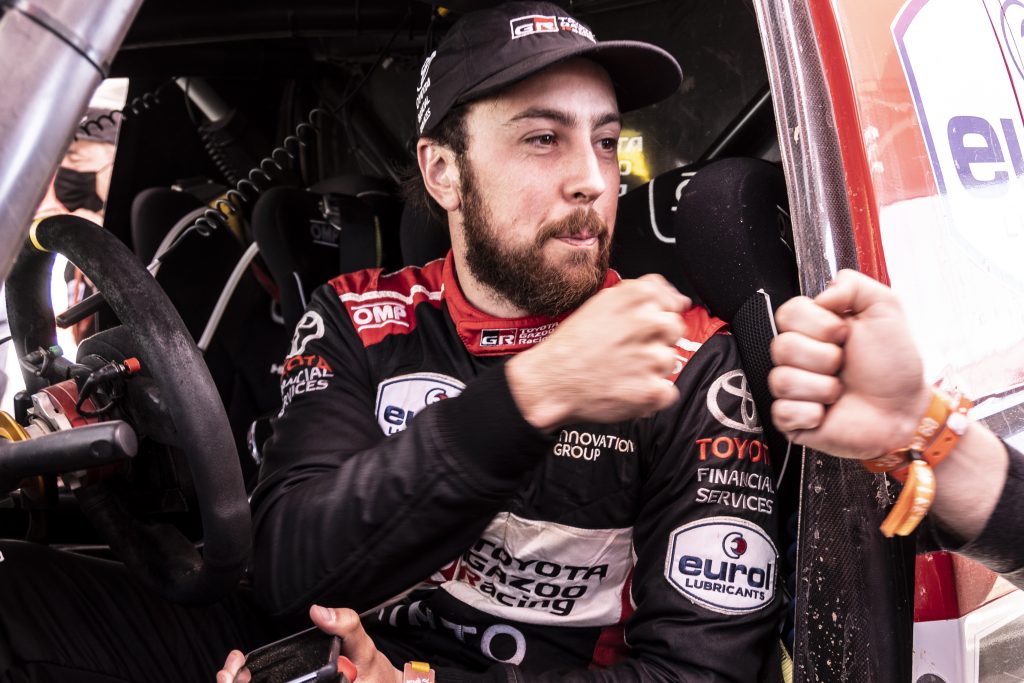 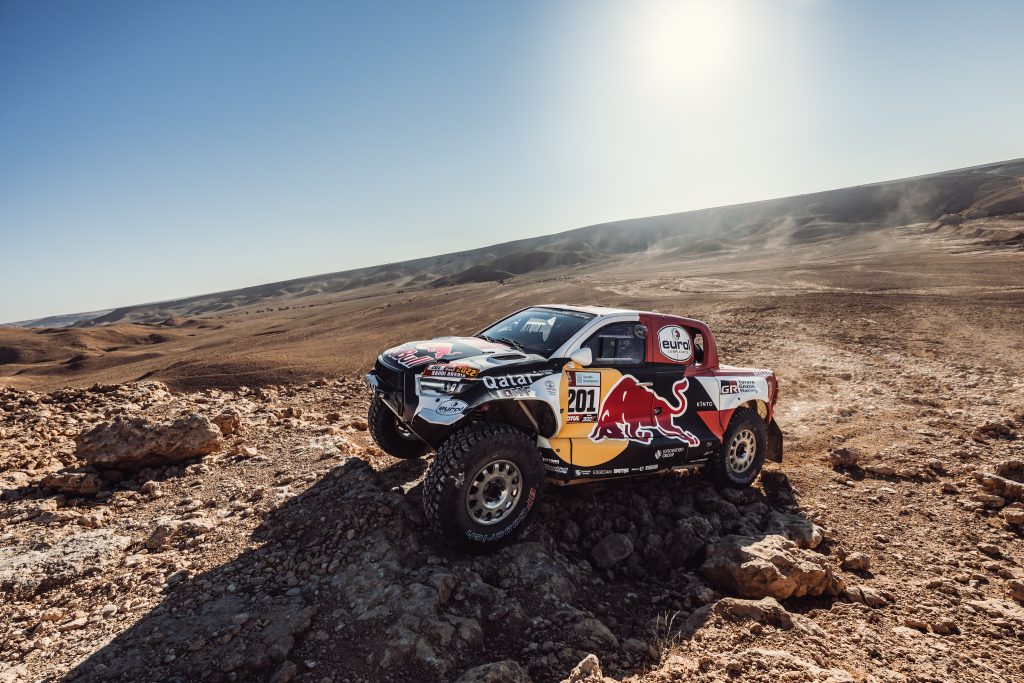 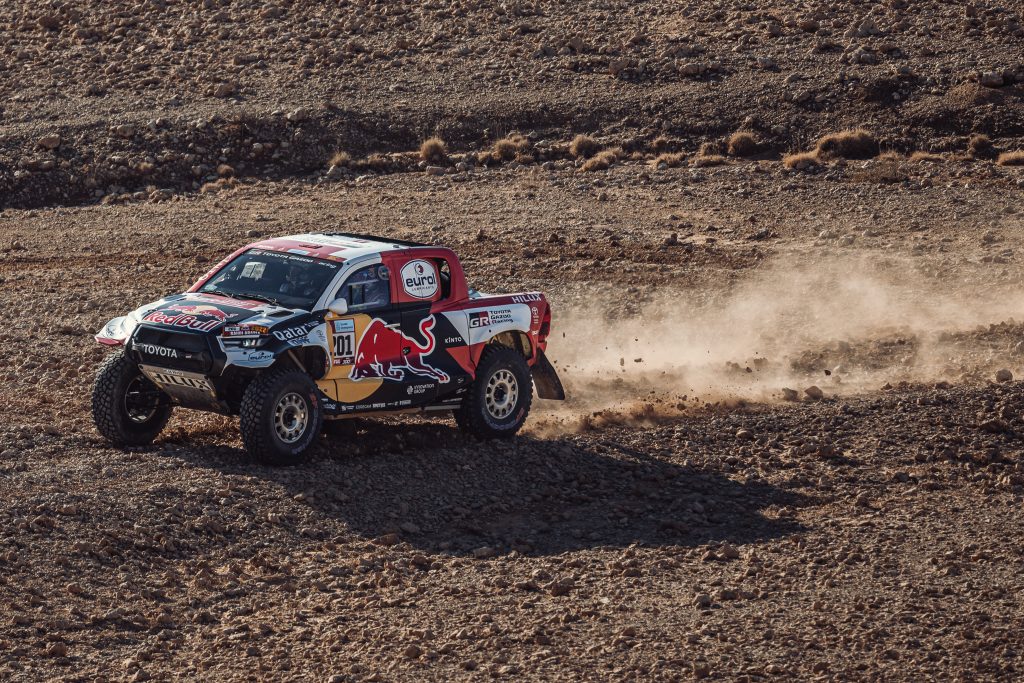