Both men qualified inside the top 10 despite handling issues hampering their efforts during Saturday’s practice sessions, with Garstang-based driver Wrathall lining up seventh on the grid for the first of today’s races. A bump from a rival on the opening lap dropped Frank to 11th, and that allowed Morgan to leapfrog his Toyota comrade.

His early dramas brushed aside, Wrathall soon demoted Morgan from 10th and within two laps nipped through on the inside of Dave Newsham’s Vauxhall through the Tarzan hairpin to claim ninth.

“I got tapped into the first corner,” said Frank, “so I lost a couple of places there, but the Toyota was really strong to begin with and I made up a lot of time and a lot of places; things were looking good.”

Wrathall had lost running time in Saturday’s practice sessions with a differential issue: “The problems we had yesterday meant that we couldn’t do any long tyre test runs,” added Frank. “Unfortunately in the race my tyres went off really badly. From about lap five it was damage limitation and a question of trying not to make any mistakes.” Wrathall made it as high as eighth but lost ground in the closing laps and had to settle for 11th.

Preston man Morgan drove brilliantly, chasing Wrathall hard after following Wrathall’s example and passing Newsham. Adam was running ninth on lap 11 when his car slipped into “limp mode” and he was forced to pits and retirement. “It’s a real shame,” said Speedworks boss Christian Dick. “Adam made a great start and was doing everything right – he was certainly looking good for at least eighth place.”

It was in race two that Morgan and Wrathall were really able to shine, despite heavy rain which made conditions treacherous. Wrathall stormed through to fifth by the chequered flag in his Dynojet Avensis and Morgan – from the back of the grid – claimed ninth.

In the driving rain, bravery was the key weapon in the Toyota men’s armoury. Frank started from 11th and Adam from 18th, and the latter made an excellent start to pick up five places on the opening lap to latch on to Wrathall’s tail.

After a conservative opening lap, Wrathall claimed two places on lap two and made quick work at the restart after a brief safety car period to take three more scalps and slot into seventh. “At the start, going into turn one, the conditions were so bad I could not see a thing,” said Frank. “I opted just to try to stay out of trouble on that first lap. The spray wasn’t too bad around most of the circuit, but just where you need to be the bravest, where you are finding the edge of what the car can do in the wet, and there’s a wall on the outside of the track… You are going in there blind. It was quite a relief to pick my way through some cars and get some space.”

After a two-lap battle Wrathall was past the Ford of Aron Smith and Rob Collard’s BMW to move into fifth. He set about chasing down the fourth-placed Focus of Mat Jackson and closed to within 3.1s of it by the end.

Morgan took up 10th place at the restart and was up to eighth by the 11th lap. An error at the Deene hairpin three laps at the end saw Adam run wide and lose a place to Ollie Jackson’s VW, but ninth was nonetheless Morgan’s best-yet BTCC result.

The reverse-grid draw for the finale handed pole position to Morgan – his and Speedworks’ first. But opening-lap dramas for Adam and Frank blunted their hopes of more top 10s. A spin for Morgan lost the Avensis driver his pole position advantage, and contact with another car left Wrathall with a puncture. Morgan came home 11th and Wrathall – with a completely flat rear Dunlop – 12th.

Said Adam: “I got a good start and had the advantage into the first corner, but the circuit was so much more greasy than in the previous race; I just lost the back end on the way into Chapman curve and that was it.”

Wrathall’s first-lap clash left the Dynojet Racing driver eighth, and he knew things were not as they should be: “After the first-lap contact the car didn’t feel right… Then it seemed to go through a stage in the race where it was quite even and I managed to make a bit of progress.”

Wrathall made it through to sixth by two-thirds distance but then he started slipping backwards as the rear tyre lost more air. Morgan, his misfire having cured itself, nipped through to snatch 11th place from Frank on the final lap.

“The handling started to get worse and worse and by the end I had absolutely no air in the tyre at all: I did quite well to get it to the finish line,” said Wrathall. “It was a shame because the Toyota is really strong in the wet. It seemed like a very long race when you have a rear puncture from lap one.”

Wrathall leaves Rockingham holding ninth place in the drivers championship, 10 points ahead of BMW driver Nick Foster. He is fifth in the Independents Trophy ranking, with Dynojet Racing fifth – one place ahead of Speedworks – among the Independent teams.

The third of the Toyota independents, Tony Hughes, finished all three races. His best result came in the second sprint with 15th place, scoring the final championship point on offer.

Hughes was delighted and relieved to have survived a difficult race: “My experience of the wet in a front-wheel-drive car is almost zero. I was quite pleased with my speed, given that I was slipping and sliding all over the place. The intention was to stay safe and bring the car home, and I’m pleased that I did.”

The home of the British Grand Prix, Silverstone, plays host to the next rounds of the Dunlop MSA British Touring Car Championship, over the weekend of 6/7 October. 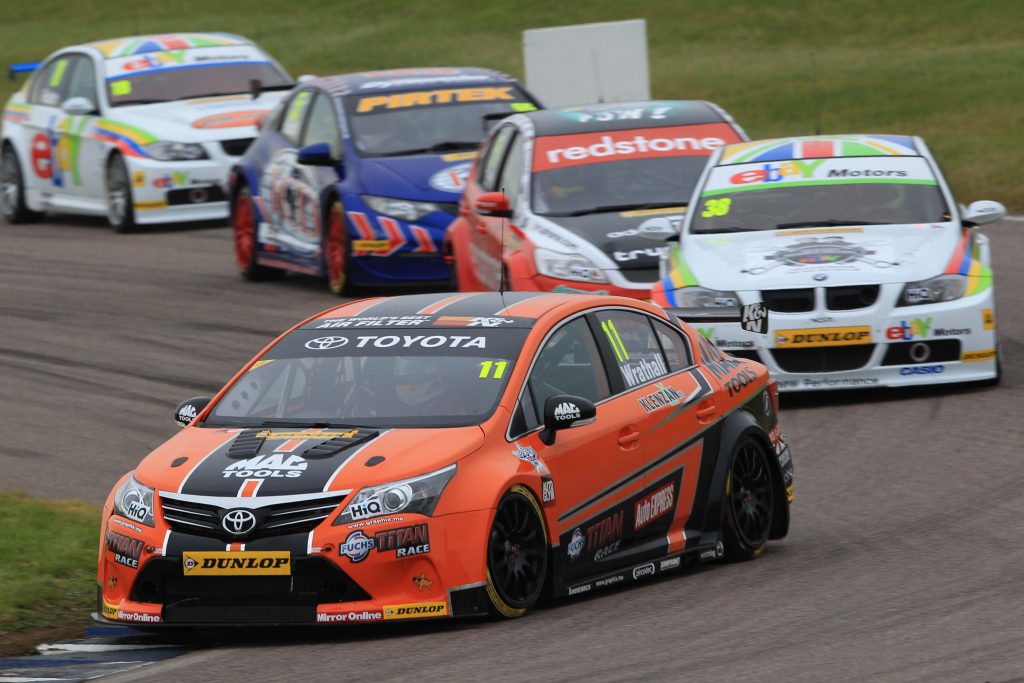 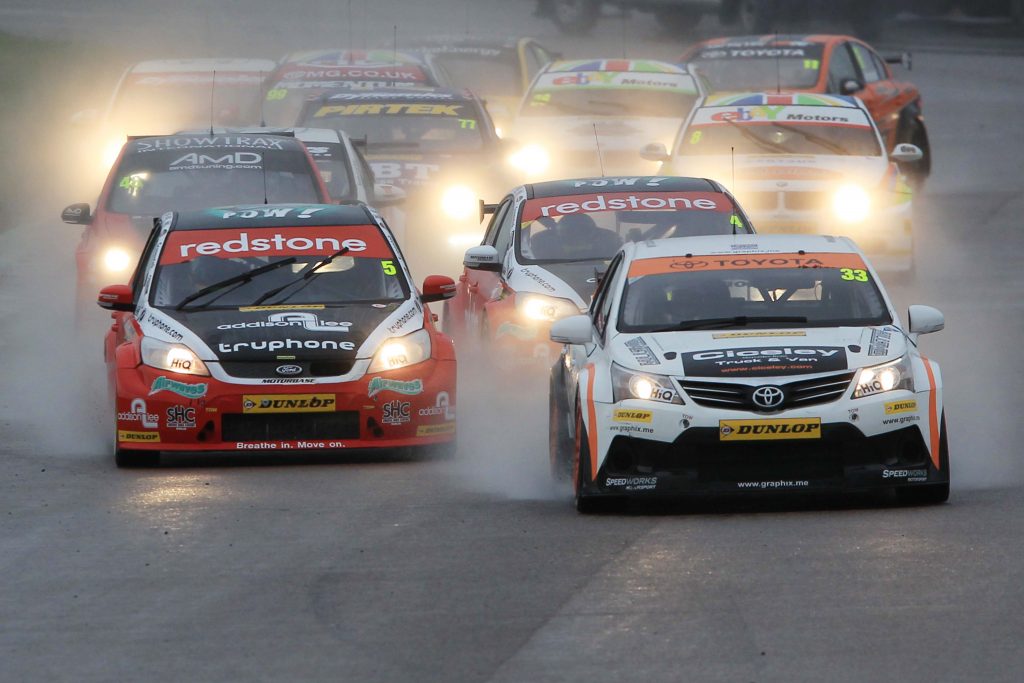