Rory Butcher and Sam Smelt both scored points for Toyota Gazoo Racing UK in an eventful British Touring Car Championship curtain-raiser at Thruxton yesterday (9 May), as the 2021 campaign got underway with a trio of races around the high-speed Hampshire circuit.

Instantly demonstrating the pace and potential of the Speedworks Motorsport-prepared Toyota Corolla GR Sport, Butcher mastered wet-but-drying conditions in qualifying to rise to the top of the timing screens with seven minutes left on the clock as competitors switched over to slick tyres.

As the 30-minute session neared its conclusion, the Scotsman remained at the summit of the standings. With several drivers still on quick laps and the track surface increasingly drying out, the times continued to tumble as the chequered flag appeared, but traffic in the chicane scuppered Butcher’s hopes of improving further, leaving him fifth in the final reckoning.

In the opening encounter – the 34-year-old’s 100th in the BTCC – he survived a lively first lap to hold position, before coming under intense pressure from Jason Plato. Fending off the attentions of the two-time BTCC champion throughout the race, fifth place cemented a strong start to the season for the Toyota man.

Race two was almost immediately red-flagged for a multi-car collision towards the back of the pack, and after making a bright re-start – vaulting from fifth to third – cold tyres then caught Butcher out and resulted in a hefty impact with the circuit’s barriers.

Following a stellar  effort by the Speedworks crew to repair his car, Butcher began the final race of the day from the rear of the grid. In wet-dry-wet conditions, he was moving ever-closer to the points-paying positions when he found himself harpooned by Carl Boardley on the last lap as the Infiniti driver recovered from a spin.

Making his return to the UK’s premier motor racing series and in only his second visit to Thruxton, team-mate Sam Smelt inevitably required some time to re-acclimatise to the circuit. After lining up 26th on the grid for race one, the Northampton-born driver avoided the early drama and gained three positions to finish 23rd, before progressing again to cross the line 20th in race two.

Smelt saved his best until last, however. With rain beginning to fall as the cars took to the grid for race three, tyre choice was the key question, but he elected to bolt wet-weather rubber onto his Corolla and reaped the benefits. In tricky conditions, the 24-year-old gained four positions within the space of a single lap, thereafter producing a mature performance to take the chequered flag 14th – in so doing, registering his first BTCC points.

With a five-week break before the BTCC resumes at Snetterton in Norfolk on 12/13 June, Butcher and Smelt occupy 15th and 22nd positions respectively in the drivers’ championship, with Toyota Gazoo Racing UK 10th in the teams’ table and Toyota third in the manufacturers’ classification.

“Overall, there are certainly more positives than negatives to take away from Thruxton, and plenty of reasons to be optimistic moving forward. Had it not been for a little bit of traffic for Rory on his final lap in qualifying, we could have been a couple of spots further up the grid or maybe even on pole and although we went slightly too conservative on the set-up for race one, we were happy to come away with a fifth-place finish.

“We made some adjustments for the next one and the car looked racy, but the long pause after the red flag meant Rory lost temperature in the rear tyres and that caught him out. The team worked so hard to get the Corolla ready again for race three, but we didn’t have time to put any real set-up on it, so the aim was simply to drive around in the hope of picking up some points. He was getting closer and closer, but then he was just a passenger in somebody else’s accident.

“For Sam, it was unquestionably a baptism of fire! To go into qualifying at Thruxton for the first time in three years and in his first event back in the BTCC is a daunting task on its own, let alone in that kind of a session. It took him a little while to generate rear tyre temperature in the damp conditions and by the time he had, it was too late.

“That meant he qualified out-of-position, and races one and two were then the first dry laps he had done around here in a while. He stuck to the plan, though, and methodically worked his way forward. He was really starting to find his feet by the end of race two, and in race three, he drove a blinder to haul himself into the points, so that was a really positive and confidence-inspiring end to the weekend for him.”

“Despite the disappointing outcome, I genuinely feel there was a lot of cause for encouragement at Thruxton. I’ve got my starts dialled in now in the Corolla and I learnt more about the car throughout, but it just didn’t translate into the results we deserved.

“We had a very steady first race and collected some decent points, which was our goal, and I definitely feel like we improved the car for race two but the accident obviously put paid to our hopes of another good score. It was just unfortunate; I lost the rear through Noble and couldn’t gather it back up. That was frustrating, because I’d made a good start and was confident I could go on the attack.

“In race three, we then got caught up in another driver’s incident, which clearly wasn’t the way we wanted to end the weekend. As I came around the corner, Boardley was rolling backwards and in that kind of situation, you make a split-second decision, but he accelerated straight into my path. It is what it is. Let’s keep our heads up and move on. I feel like the car is giving me all the right feedback, so next time out, I want to exploit that good feeling and get some results for myself and the team.”

“It was nice to finish the weekend on a high by scoring my first BTCC points. I think even if it had been consistently dry throughout, it would have been challenging coming back to Thruxton after three years and with no prior testing at the track, but the changeable weather in every session made it more difficult still.

“We just tried to stay focussed on what we were doing and keep gaining experience, and following a bad qualifying, the plan was to chip away in each race, which is what we did. It was good to actually get stuck in and fight with some other drivers in race three, because in the first two, it felt like I had been hanging on a little bit. It was nice to finally be able to show what I can do.

“With the rain starting, stopping and then starting again, I didn’t know how much I needed to look after my tyres and in hindsight, I could probably have pushed a little bit harder in the middle phase of the race, but it paid off in the end and it was great to get the monkey off my back.” 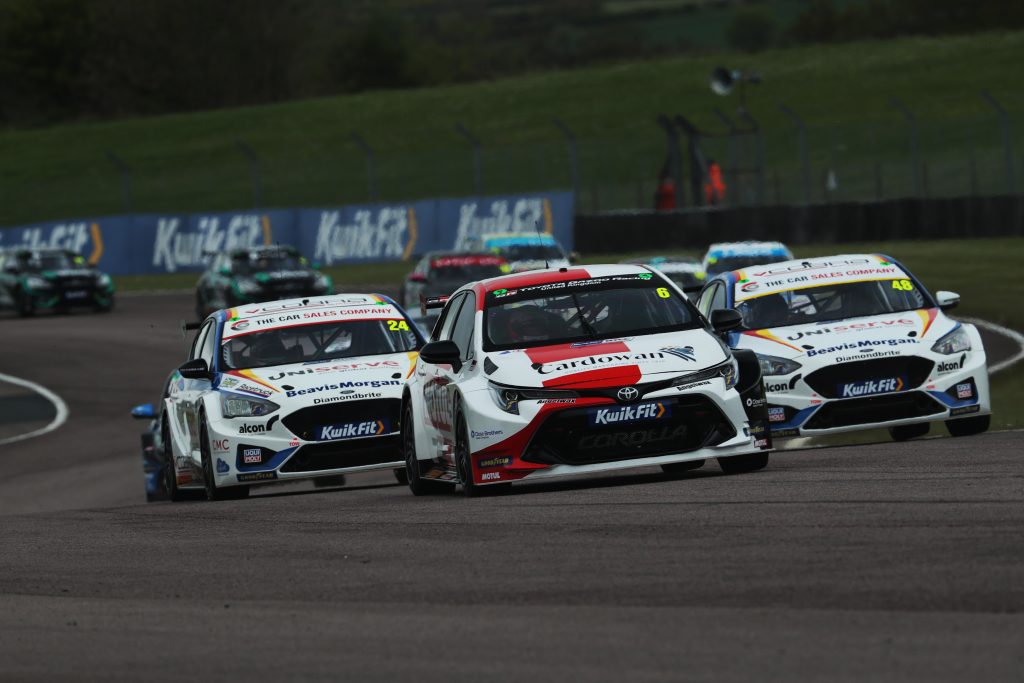 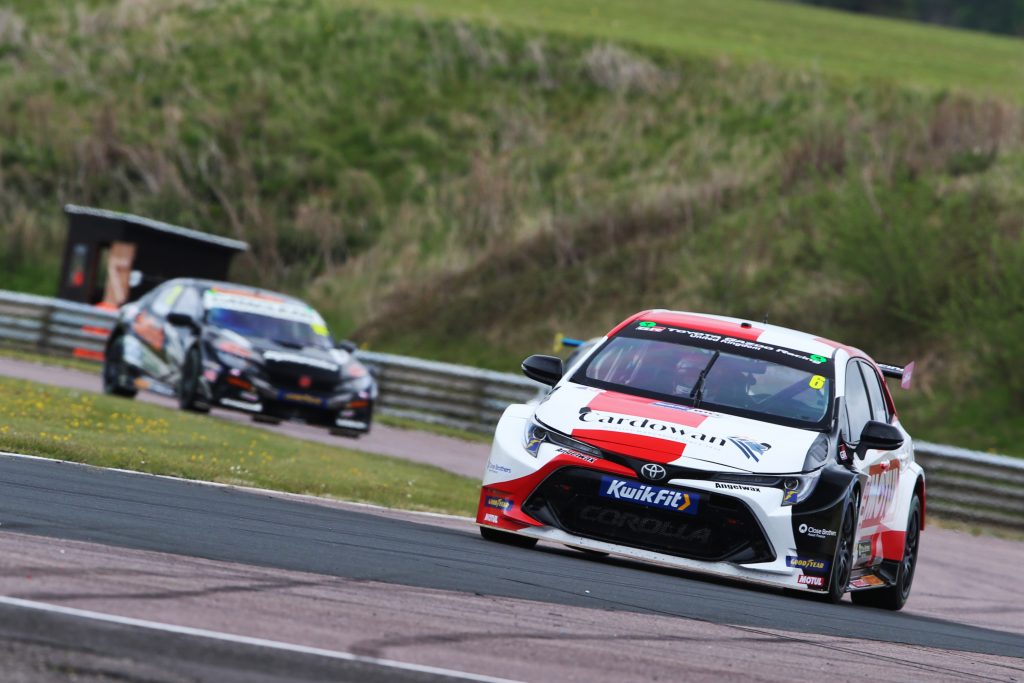 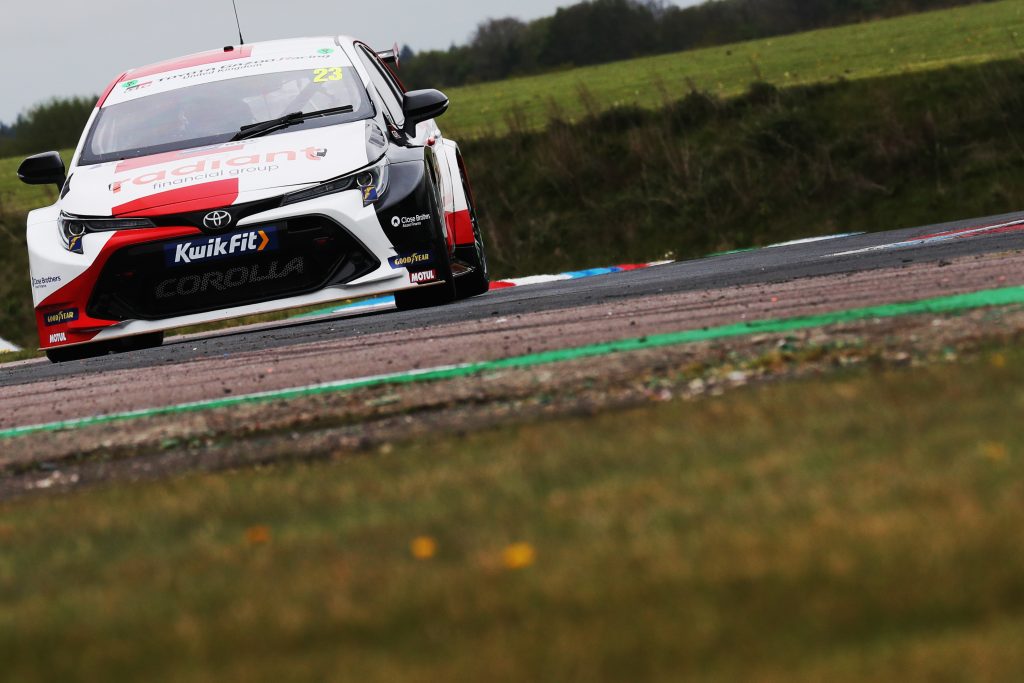 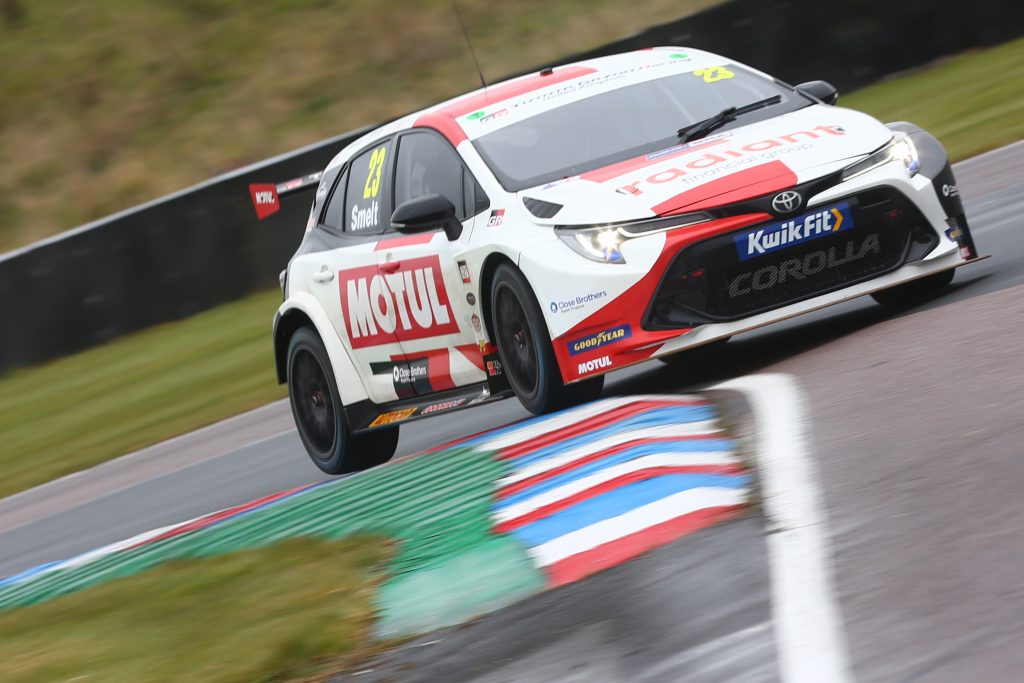