The 2022 Dakar Rally has reached its mid-point after six competitive stages, with the rest day bivouac set up near Riyadh, the Saudi Arabian capital. For Toyota Gazoo Racing, the opening week brought highs and lows, but as it stands, Nasser Al Attiyah and Mathieu Baumel are in the overall lead by 48min 45sec, so the team have every reason to be happy.

Al-Attiyah and Baumel opened their account by winning the short, sharp prologue between Jeddah and Ha’il, giving them the opportunity to choose their starting position for the first stage. They selected 10th position on the road and attacked from there. In a stage where many of the top competitors were foiled by tricky navigation, the GR DKR Hilux T1+ crew capitalised on their position and built an early lead. From there, they controlled their pace, driving a measured race, yet winning Stage 4 to further extend their lead.

For Giniel de Villiers and co-driver Dennis Murphy, Dakar 2022 has been a tumultuous affair. Initially, there was doubt about de Villiers’s participation due to Covid-19, but after testing negative, the South African made his way to Jeddah and joined the team. Their race started strong, but an incident with a biker in Stage 1B saw them penalised by 5min, putting the brakes on their progress.

De Villiers was penalised, but met the biker in the bivouac, where the pair agreed that there was no ill intent and that incidents such as these are inherently part of the race. Despite the setback, de Villiers and Murphy continued to perform at the highest level.

A second incident, in Stage 2, saw de Villiers incur a second penalty of five hours, for allegedly running over the motorcycle of a biker who had crashed behind a dune. The Toyota crew managed to avoid injuring the biker by swerving at the last second, and it was later determined that the system designed to warn the crew in such situations was not operational, despite the car passing the mandatory scrutineering before the start of the race.

The penalty sent the crew tumbling down the order and they had to push themselves to continue racing for good stage times. Their perseverance paid off when the penalty was reversed after an investigation, which meant that the pair were classified in fourth place at the mid-point, just 1min 31sec behind third place, and 3min 2sec behind second.

For Henk Lategan and Brett Cummings, the first week of the 2022 Dakar Rally brought both highs and lows. The pair performed well in the prologue, posting the fourth fastest time. They started Stage 1B at a good pace, but a problem after changing a wheel mid-stage saw the wheel studs sheer off their Toyota Hilux, leaving them to affect running repairs that cost them three hours.

They bounced back in Stage 3, posting the fastest time for more than 124 miles of the rally’s longest stage. The South Africans seemed set to win their first Dakar stage, but a cruel twist of fate saw the right rear wheel hub sheer off their car, forcing them to wait in the desert for the assistance truck. They lost six hours as a result, putting them well out of contention in the race.

By contrast, Stage 5 was a dream stage for Lategan and Cummings. Despite their driver’s door malfunctioning and two punctures, the crew set the fastest pace on the day, recording their maiden Dakar Rally stage victory. This meant that they had to open the road on Stage 6, which again proved tricky and saw them lose a further 24min to the stage winners. Despite this, the crew remain in good spirits, and will push on to record more competitive stage times in the second week of the rally.

The final Toyota Gazoo Racing pairing of Shameer Variawa and Danie Stassen started their Dakar 2022 campaign with a run of bad luck. There may also have been an element of nerves early on, especially for co-driver Stassen, taking part in his first Dakar Rally.

But as is typical of Toyota Gazoo Racing crews, the pair fought on despite their setbacks, and clawed their way back into the Top 20 by the mid-point. A highlight for them was the final stage leading up to the rest day, which saw them post the best time of all Toyota Gazoo Racing crews. They went seventh fastest on the day and moved up to 17th in the overall standings.

Dakar 2022 consists of twelve competitive stages, with the rest day coming after the first six. The technical crews use this time to repair any problems with the cars and replace any worn parts as a precaution. The twin turbocharged 3.5 litre V6 engine from the new Land Cruiser GR Sport is used in production form and has proven highly reliable during the race. With only slight modifications to the cooling system, this engine is identical to that found in the production car. Since the rules do not allow for more power output than that delivered by the standard engine, the team can use the highly reliable production engine without placing undue stress on it.

The new GR DKR Hilux T1+ also uses larger, 37-inch tyres, which have proven significantly tougher than the 32-inch tyres used in the past. Not only can the drivers traverse tougher terrain at higher speeds, but they have also gained confidence as a result of the bigger tyres’ ability to absorb impacts. Overall, the team has suffered significantly fewer punctures than during the 2021 Dakar Rally, and this is reflected in the stage times set by all four crews.

Six stages remain, with the crews departing from Riyadh on 9 January to start the final trek. First up is Stage 7, from Riyadh to Al Dawadimi – a long stage of more than 430 miles, including a timed section of 250 miles. The rally is scheduled to finish on 14 January, in Jeddah. 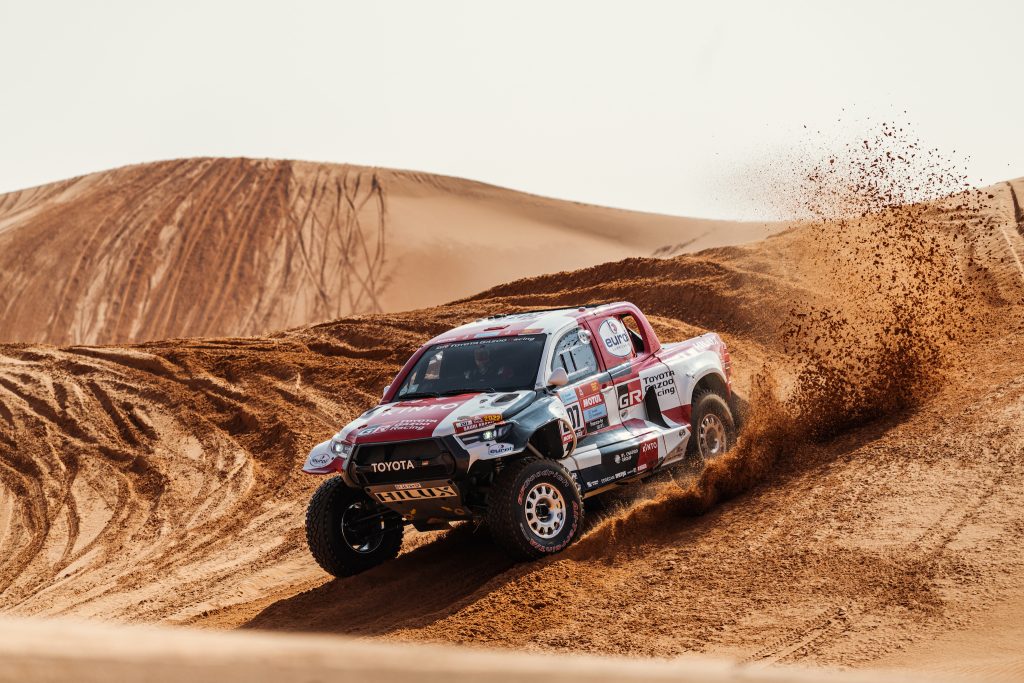 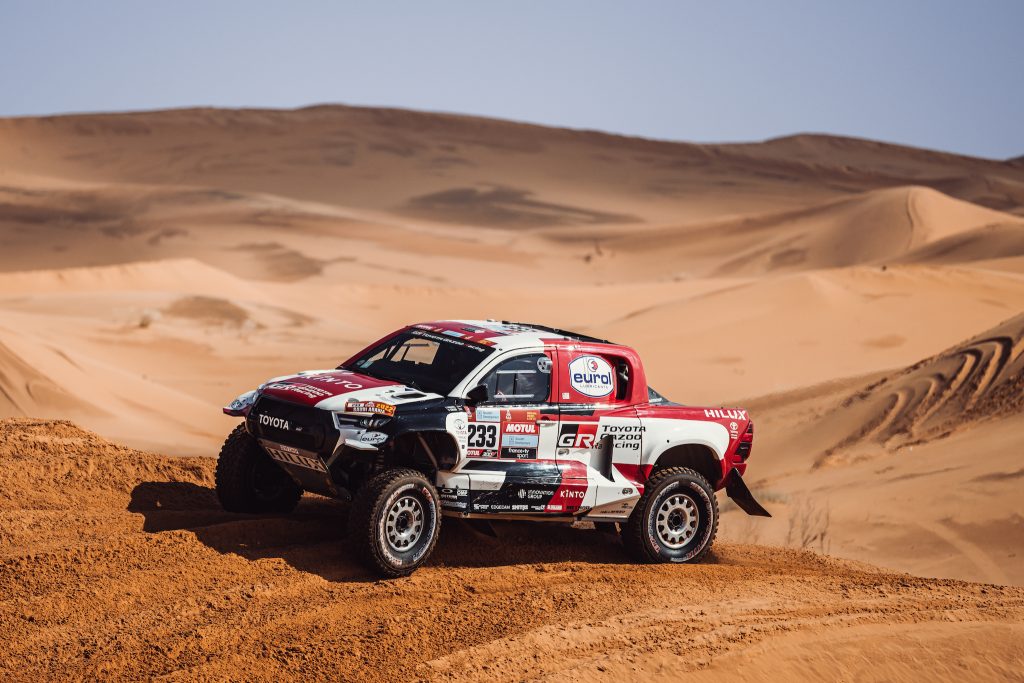 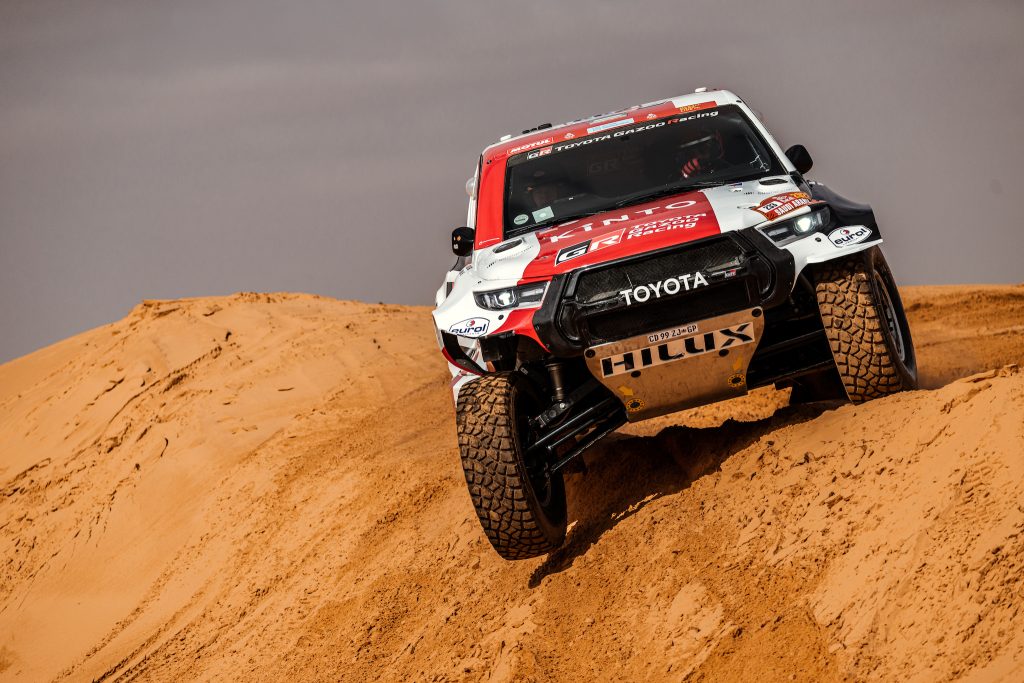 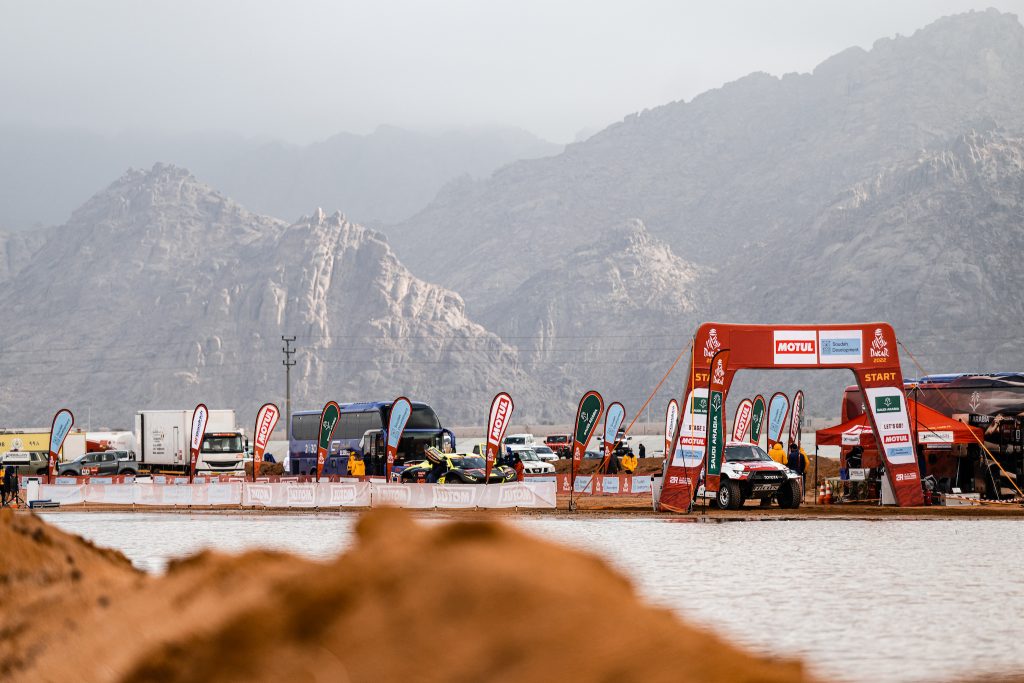