Home » Toyota Develops New Magnet for Electric Motors, Aiming for 50 Per Cent Reduction in Use of Critical Rare-Earth Elements

Toyota Motor Corporation announced today that it has developed the world’s first1 neodymium-reduced, heat-resistant magnet. Neodymium magnets are used in the high-output motors found in electrified vehicles, numbers of which are expected to increase rapidly in the future.

Toyota’s new magnet uses significantly less neodymium, a rare-earth element2 (rare earth), and can be used in high-temperature conditions. No terbium or dysprosium is used in its manufacture, either, rare earths categorised as critical materials3. A proportion of the neodymium has been replaced with lanthanum and cerium, which are low-cost rare earths.

Neodymium plays an important role in maintaining high coercivity – the ability to maintain magnetism – and heat resistance. Simply reducing the amount of neodymium and replacing it with lanthanum and cerium would cause a decline in motor performance, so Toyota adopted new technologies that suppress any deterioration in these qualities. The result is a magnet with equivalent levels of heat resistance, but with a reduction of up to 50 per cent in amount of neodymium used.

This new type of magnet is expected to be useful in expanding the use of motors in areas such as automobiles and robotics, as well as maintaining a balance between the supply and demand of valuable rare earth resources. Toyota will work to further enhance performance and evaluate the magnet’s use in products, while accelerating the development of mass production technologies with the aim of early adoption for different applications, including vehicles and robotics.

The development of elemental technologies for motors, inverters, batteries and other components will require steady R&D in anticipation of future needs. Toyota considers these technologies to be essential for electrified vehicles and will continue to make steady progress in every area, while working to build a foundation to support the increased use of electrified vehicles in the future.

It is important that magnets used in automotive motors and other applications have high coercivity (the ability to maintain magnetisation) even at high temperatures. For this reason, approximately 30 per cent of the elements used in magnets are rare earths.

When powerful neodymium magnets are used at high temperatures, such as for automotive applications, terbium and dysprosium are generally added to increase high-temperature coercivity. However, terbium and dysprosium are rare and expensive metals found in locations with high geopolitical risks. Because of this, considerable efforts have been made to develop magnets that do not use these metals, and positive results have been achieved.

Production volumes of neodymium are relatively high among rare earths, but there are concerns that shortages will develop as electrified vehicles, including hybrid electric and battery electric vehicles, become increasingly popular in the future. Despite this, little effort has been made to address neodymium use.

To overcome these issues, Toyota successfully undertook development of technologies that can eliminate the use of terbium and dysprosium and reduce the amount of neodymium used. Through substitution of neodymium with lanthanum and cerium, which are abundant and low-cost rare earths, high heat resistance can be maintained and loss of coercivity minimised.

Use of rare earth in neodymium magnets

The new neodymium-reduced, heat-resistant magnet is able to maintain coercivity even at high temperatures because of the combination of three new technologies: –

It is now possible to retain high coercivity at high temperatures through the reduction of the size of the magnet grains to one-tenth or less of those found in conventional neodymium magnets and the enlargement of the grain boundary area.

Specific ratio of lanthanum and cerium

If neodymium is simply alloyed with lanthanum and cerium, its performance properties (heat resistance and coercivity) decline substantially, complicating the use of light rare earths. As a result of the evaluation of various alloys, Toyota discovered a specific ratio at which lanthanum and cerium, both abundant and low-cost rare earths, can be alloyed so that the deterioration of properties is suppressed.

This R&D initiative was conducted as part of the Development of Magnetic Material Technology for High-efficiency Motors for Next-Generation Automobiles report issued by the New Energy and Industrial Technology Development Organization (NEDO).

The new neodymium-reduced, heat-resistant magnet not only eliminates the use of terbium and dysprosium, rare earths necessary for neodymium magnets that require high heat resistance, but it also reduces the amount of neodymium used. This new magnet is expected to have a wide range of applications in motors that require relatively high output such as those required for electrified vehicle drive motors and generators, electric power steering, robots, and various household appliances. It will also contribute to reducing the risks of a disruption in supply and demand of rare earths and price increases.

Toyota will proceed with further practical use in mind, perform application assessments in motor vehicles, and continue researching and developing technologies with the aim of low-cost, stable production.

Toyota expects that the magnets will be put to use in electric power steering motors for automobiles and other applications in the first half of the 2020s. Furthermore, the company will undertake development with the aim of practical application in high-performance electrified vehicle drive motors within the next 10 years.

1 As of January 2018, Toyota Motor Corporation

2 A group of 17 elements that have similar properties. Among the rare earths are lanthanum, cerium, neodymium, terbium, and dysprosium. It is possible for various functional materials to manifest through use of these elements.

3 Metals of which stable supply is politically important, even though relatively small amounts are present in earth’s crust or extraction is difficult due to technological or economic reasons. (Ministry of Economy, Trade and Industry, Japan)

Toyota Develops New Magnet for Electric Motors, Aiming for 50 Per Cent Reduction in Use of Critical Rare-Earth Elements 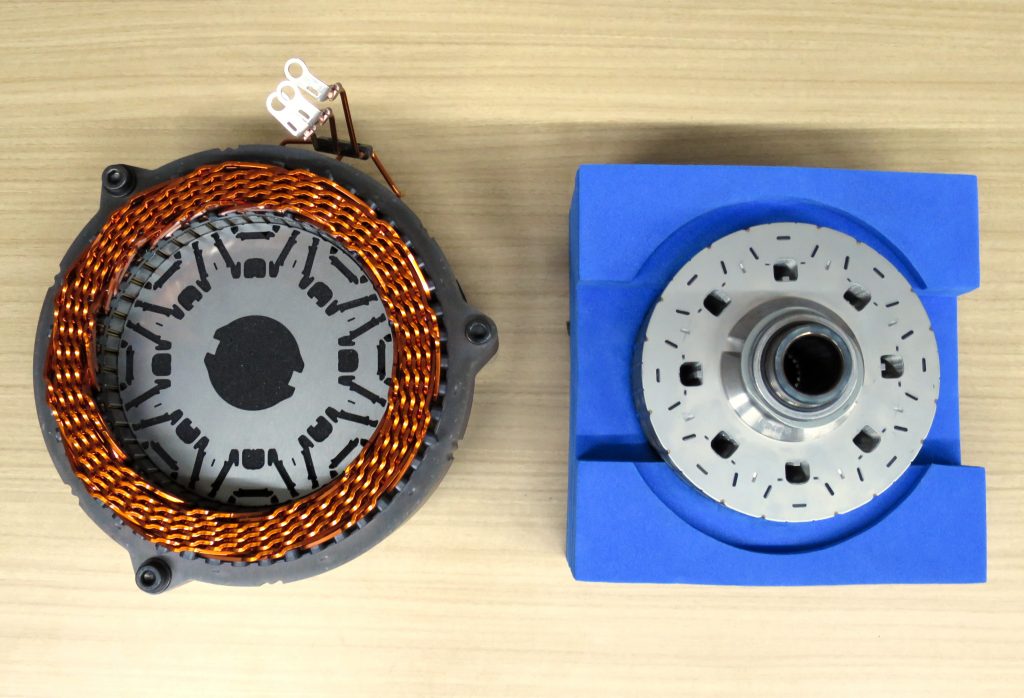