Toyota Gazoo Racing’s Nasser Al-Attiyah and co-driver Mathieu Baumel recorded their second stage victory of the 2022 Dakar Rally when they triumphed on Stage 4, between Al Qaisumah and Riyadh. The Toyota Hilux crew had a clean run and managed to extend their overall lead in the rally to 38min 05sec. This came after teammates Henk Lategan and co-driver Brett Cummings set the pace during the first half of the stage, only to see what seemed like a certain win slip away.

The South African pairing started the stage on a charge, trading blows with veteran Carlos Sainz at the head of the field. Their pace was electric, and mid-way through the longest stage of this year’s event, a stage win looked assured. But their charge came to a halt when the right-rear wheel hub broke on their Hilux, leaving them stranded.

This dealt a second, crippling blow to their Dakar 2022 campaign, following the three hours that they lost during Stage 1B. The pair eventually made their way to the bivouac at Riyadh, where the technical crew repaired their GR DKR Hilux T1+, in preparation for Stage 5.

Stage 4 brought a good result for Giniel de Villiers and Dennis Murphy in the #207 Toyota Hilux. They started the day in fourth place in the overall standings, and maintained a steady pace. They caught up with a slower car mid-stage, then hit a rock in thick dust when attempting to pass, causing a puncture.

At this point, teammates Al-Attiyah and Baumel caught up with them, and de Villiers elected to let the rally leaders pass, following them to the end of the stage without further incident. They remain in fourth place overall but are now just 2sec behind the crew ahead of them – fellow-Toyota Hilux driver Yazeed Al-Rajhi and co-driver Michael Orr.

For Shameer Variawa and Danie Stassen, Stage 4 started very well. They passed four slower cars and were setting a competitive pace. A puncture broke their rhythm and they struggled with small niggles that cost them time.  Despite this, they recorded the 25th-fastest time of the day, and are now in 23rd position in the overall standings.

With the bivouac now set up near the Saudi Arabian capital of Riyadh, the Dakar is approaching the Rest Day. Stages 5 and 6 will both be looped routes, starting and ending near Riyadh. Stage 5 features a timed section of 245 miles over hard-packed soil, sand and dunes. A liaison of 68 miles will link the start of the stage with the bivouac, and the crews will cover the same distance when they return after completing the stage.

Dakar 2022 will reach its mid-point on 8 January 8 with a rest day in Riyadh. Six more stages will follow, with the rally drawing to a close in the city of Jeddah on 14 January.

“Today brought some great results for the team, with Nasser and Mathieu winning the stage; and Giniel and Dennis recording a solid result. Unfortunately, Shameer and Danie experienced some niggles that put them back a bit, but they should be fighting fit again tomorrow.The big disappointment was with Henk and Brett, who led the stage for more than 124 miles. They stopped to change a punctured wheel, and some miles later the tracking showed that they had come to a stop. The right rear wheel hub had broken off, forcing them to wait for the support truck’s assistance. Obviously, we’re very concerned about the cause of the problem, so we’ll be investigating thoroughly once they return to the bivouac.”

“Today was a good day for us, without any problems. We’ll try to keep this rhythm going for the coming days, starting with tomorrow’s stage where we’ll be opening the road.”

“It was a long stage, and the first part was really fast, with some difficult sections that could catch you out. The second part brought some nice dune crossings, and the last part was quite fast again, with riverbeds and some rocks. We had a fairly good stage, though we had a puncture after the restart in the middle of the stage. We were stuck in the dust of (Mattias) Ekstrom, and hit a rock that we couldn’t see, so we had to stop and change the wheel. This put us back a bit, and Nasser caught up with us. I decided to let him past and we just followed him to the finish.”

“We started the stage with an excellent first stint, overtaking four or five cars. But then we had a puncture, and the little niggles started creeping in. First, we couldn’t get one of the wheel nuts off, and then there were more little problems that caused us to lose a lot of time. We can only hope that tomorrow is a better day for us.” 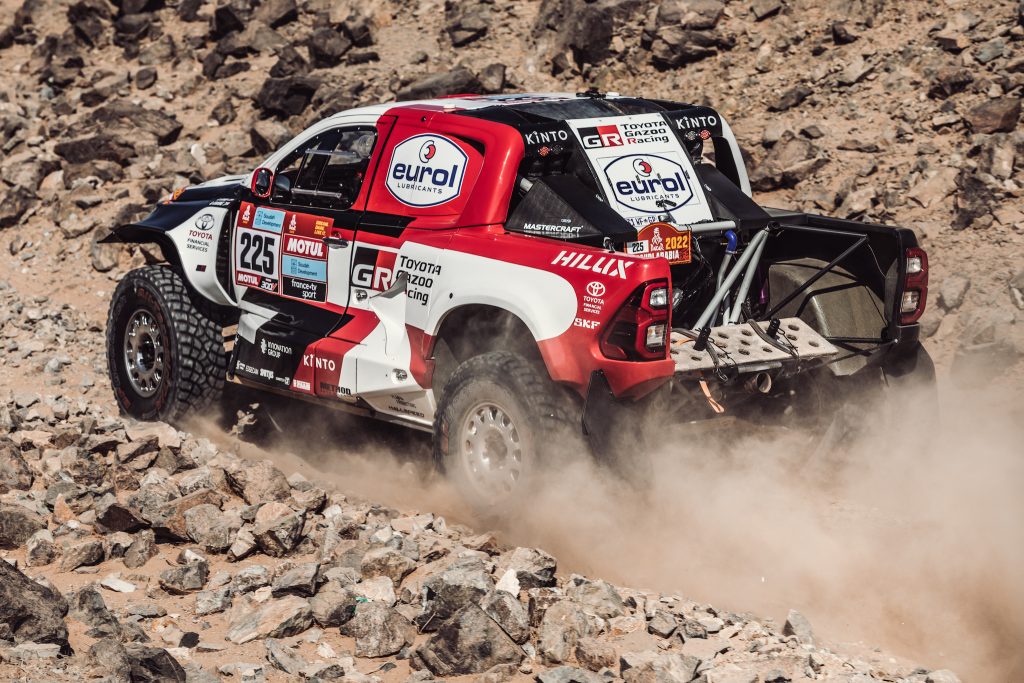 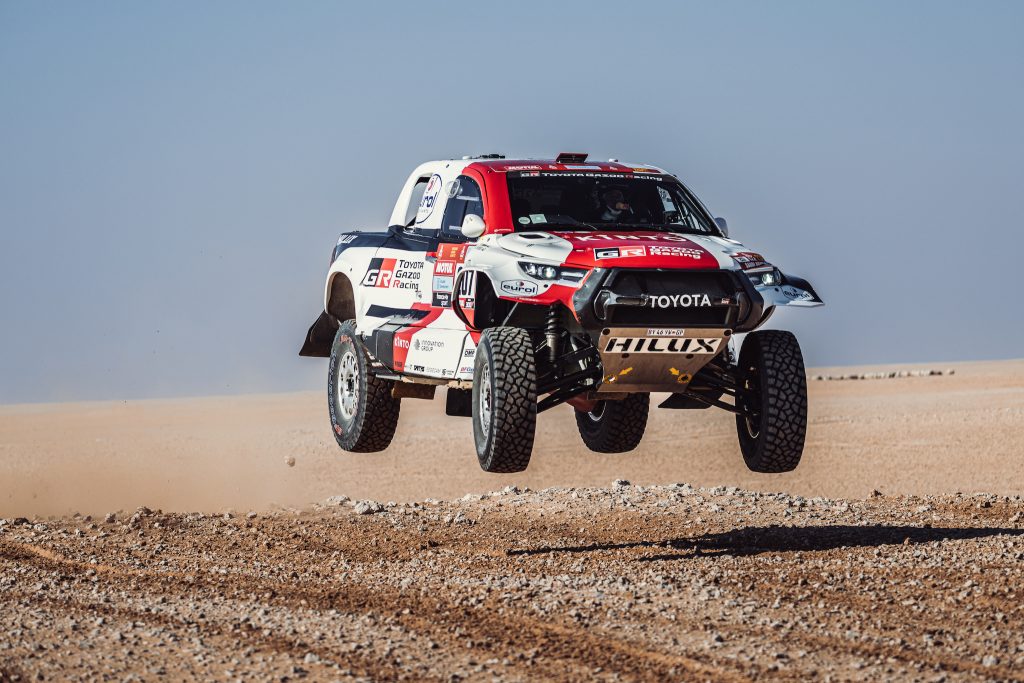 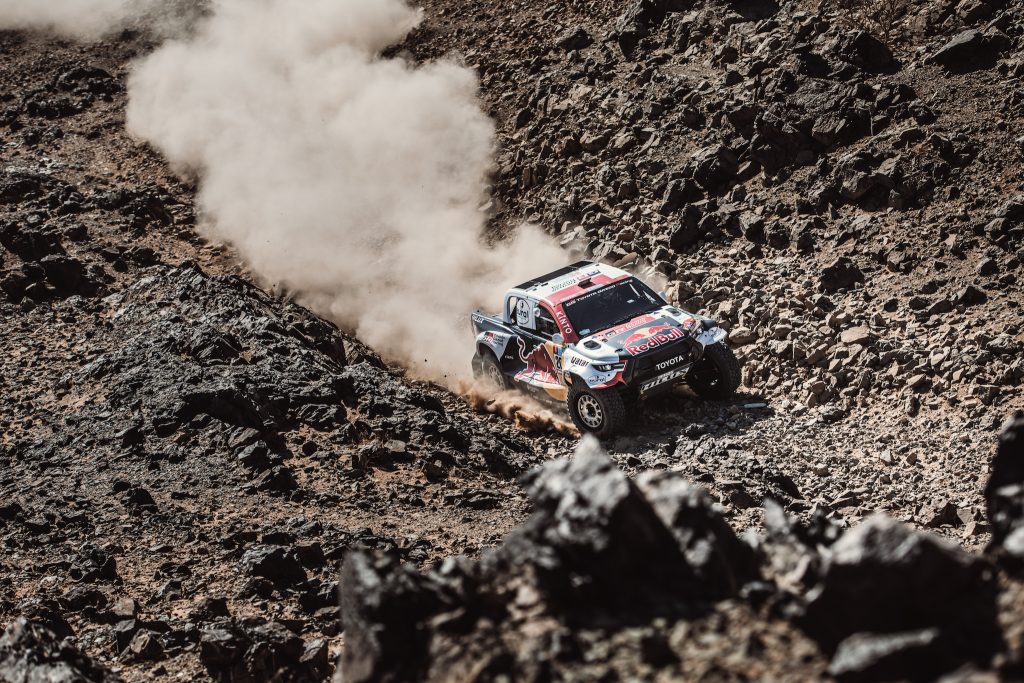 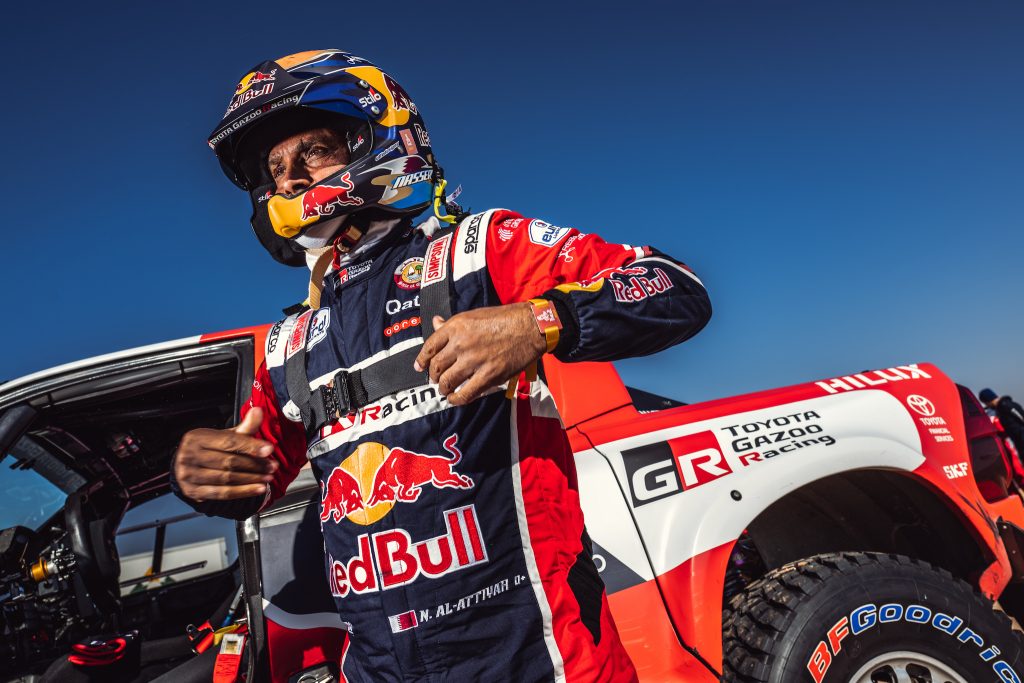 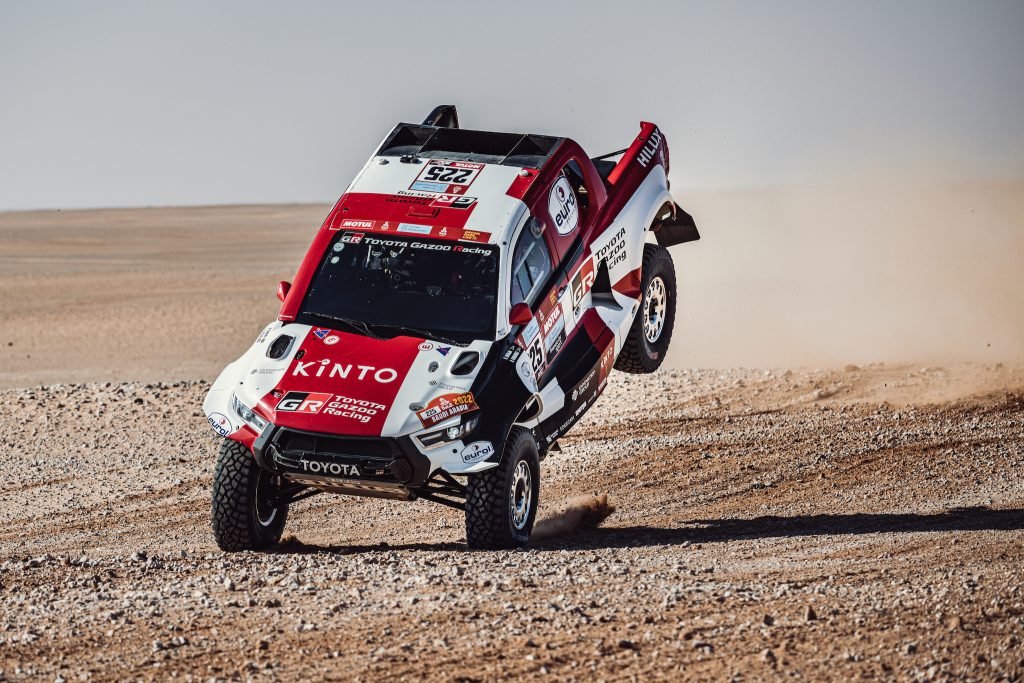 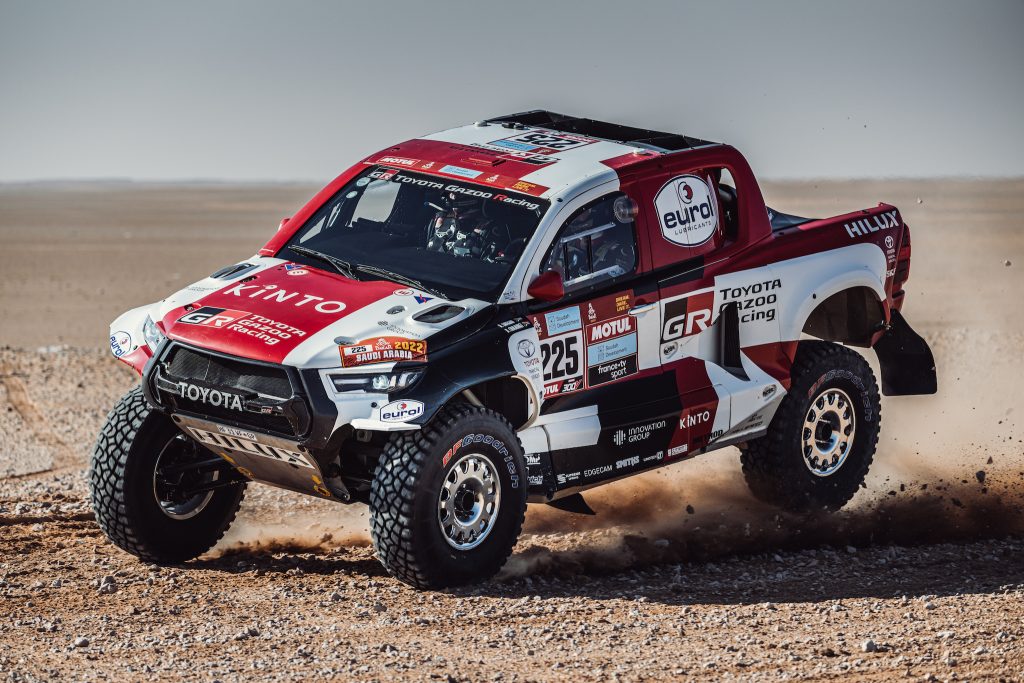 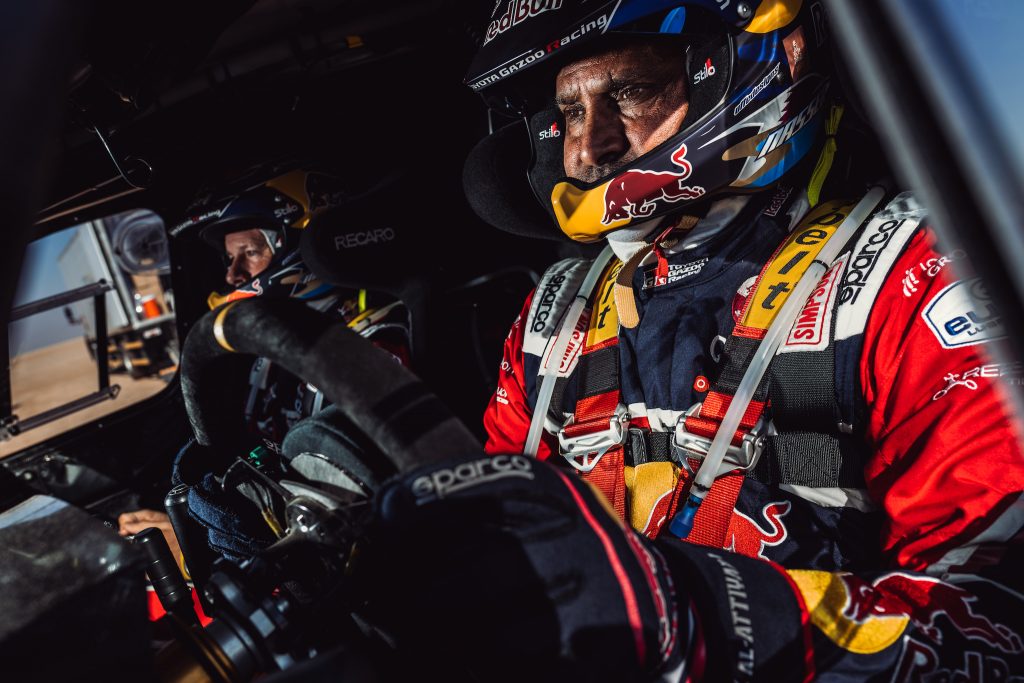 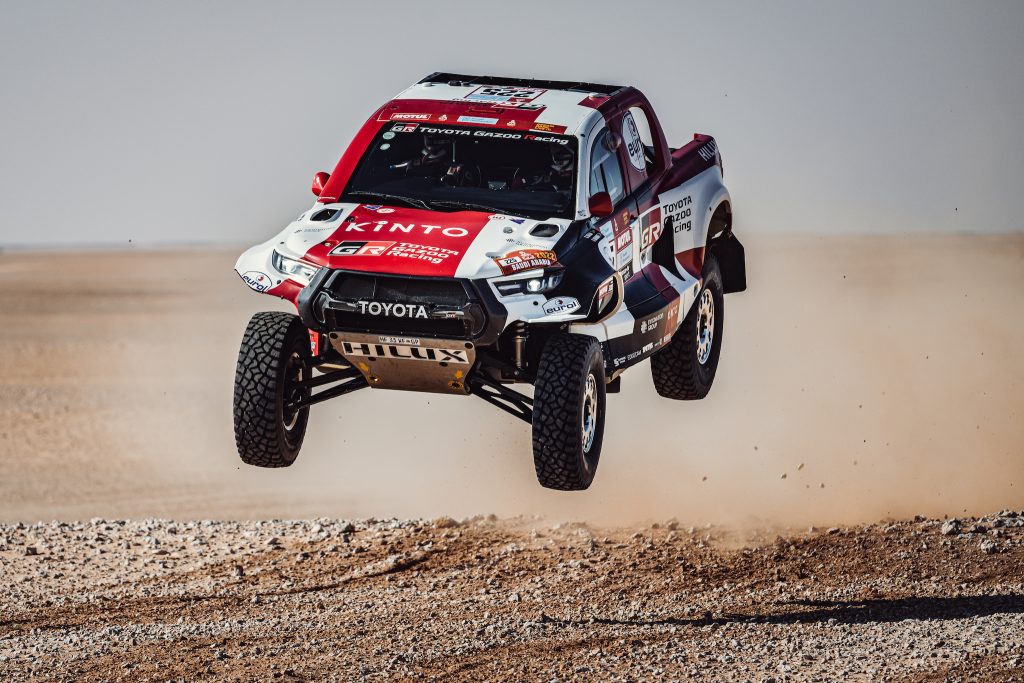