Toyota Motor Europe (TME) has started transporting new cars by cross-Channel freight train services between its Valenciennes vehicle logistics hub in northern France and the major UK rail depot at Toton, in Nottinghamshire. This is the first phase of its pan-European plan to move a larger number of vehicles by rail freight in line with its ambition to decarbonise its logistics operations.

TME, together with its logistics partners Getlink and CAT Group, will initially transport around 70,000 cars per year, equivalent to 270 train-loads. Corolla hybrid electric vehicles produced at its Burnaston plant in Derby will be freighted to its Valenciennes hub, and Yaris models produced in France will be delivered to the UK.

This new international freight traffic is expected to deliver a CO2 reduction in excess of 10 per cent for TME’s total logistics network and reduce delivery lead-times by around 50 per cent. The initiative also positions Toyota as the only automotive manufacturer currently using the Channel Tunnel link for the transportation of new vehicles.

As part of its goals to achieve carbon neutrality in Europe by 2040, TME plans to convert a number of its principal European logistics routes to rail by 2025. The second phase of its “Rail Project” will commence in April 2022, when its Valenciennes logistics hub will link up with the company’s plant in Kolin (Czech Republic), where it produces Yaris and the all-new Aygo X.  The pan-European rail network will expand with additional routes to Italy, Spain and Turkey. Following the completion of this phase, the company anticipates it will save more than seven million truck haulage kilometres per year, providing both emissions benefits and reducing road usage.

Commenting on the launch of the new freight route at Toton on 24 February, Jean-Christophe Deville, TME Head of Vehicle Logistics, said: “The launch of this rail freight connection marks an important step as we look to progressively reduce our carbon emissions over time, improving our operations with innovative and sustainable solutions. We have an ambitious plan to expand our rail usage, which will deliver additional customer benefits with improved delivery lead-times.” 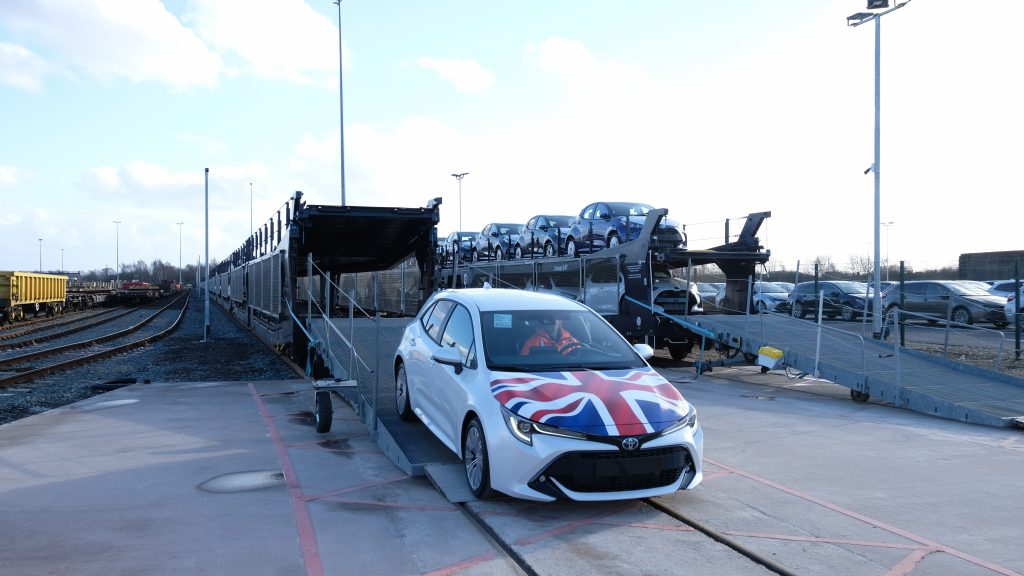