Home » Toyota Setsuna: the Car as a Family Heirloom, Crafted in Wood

Toyota is defying the notion that modern cars have to be high-tech machines packed with the latest technologies by creating a new roadster concept crafted in wood. Setsuna will be the focus of the company’s first appearance at Milan Design Week (12 – 17 April), an open-top two-seater conceived to embody the affection owners develop for their cars over time and the central role they can play in family life.

Today Toyota has released more images, video footage and details of the car, highlighting the craftsmanship and details that make Setsuna unlike any other vehicle.

Kenji Tsuji, the engineer responsible for Setsuna’s development, said: “When we created Setsuna, we envisaged a family pouring its love into it over generations so that the car gains an irreplaceable value.”

In its development of a car that makes such great use of wood, the Toyota team consulted many experts, including carpenters who specialist in building shrines and temples, and shipwrights.

“Sumitomo Forestry, a company that fully understands our concept, shared their knowledge of wood construction with us, and together we engaged in various types of joint development from the early stages, including wood selection and proposals for processing techniques and assembly methods,” said Tsuji.

“While we used wood as the main material, we also poured lots of time and passion into the car itself with our colleagues, creating a prototype and evaluating it so that the car would offer basic performance in the form of driving feel and comfort. By displaying Setsuna, which was created with these hopes in mind, and receiving a wide range of opinions, we believe that we can further improve this concept.”

Every new car has a clock in the dashboard, but the timepiece in the Toyota Setsuna doesn’t only mark the minutes and hours, it also counts the passing years. It will mark up to a century to record its years of constant service to successive generations and its evolving role as a valued member of the family in its own right.

Setsuna’s circular, radial emblem captures the idea of “the accumulation of moments”. It represents both a clock face and the blooming of a flower, reflecting the designers’ wish for a growing relationship between car and family.

Wood was chosen as the primary material for Setsuna’s construction, to express the idea that love grows as time passes; wood changes in colour and feel in direct response to the love and care shown to it. As Setsuna is passed from generation to generation, the physical changes in its wooden bodywork reflect the bond it has built with its owners and their shared experiences.

Setsuna is not a piece of furniture; it is a fully functioning car, although not road-legal. For this reason, different types of wood were chosen for specific parts of the vehicle: Japanese cedar, with its vivid grain and flexibility for the exterior panels; strong and rigid Japanese birch for the frame; hard-wearing Japanese zelkova for the seats; and smooth-textured castor aralia for the seats. The panels feature different grain patterns in the cedar, achieved with straight and cross-cutting of the raw timber, creating attractive contrasts.

Sections of Setsuna have been crafted using traditional Japanese joinery techniques such as okuriari and kusabi. Okuriari allows the panels to be fitted without using nails, so they can be easily removed. It makes for stronger joints and allows minor changes to be made to the mortise and dovetail joints if they become worn over time. The joints in the car’s frame feature split tenons fastened to through-tenons that pass through several component parts in the frame to give a secure hold.

Setsuna’s body is made up of 86 handmade panels, each of which will change in appearance as the car ages. When repairs are needed, individual panels can be removed and replaced, without the whole bodywork having to be taken off. Repaired panels will bear the marks of the craftsmen who worked on them, adding to the individual character of each car.

Lacquer finishing is applied by hand to bring out the beauty of the wood grain. Wipe-lacquering is applied to the door mirrors, seats, steering wheel and the banding lines on the bodywork, a technique that involves repeatedly applying the lacquer to the surface and wiping to set it along the grain of the wood to create a combined texture. Colour and intensity will change with use over time to give the vehicle a different appearance at different moments in its lifecycle.

The seats have been designed to be comfortable and inviting to anyone, in the same fashion as park bench. The castor aralia timber has been lacquered and the parts which come into most contact with the body are covered with leather.

Aluminium is used for parts such as the wheel caps, steering wheel and seat frames, creating both contrast and harmony with Setsuna’s wooden features.

Setsuna’s wooden elements will slowly bend over time, giving the body a pronounced, beautiful curve, rather like a boat. The front presents a heptagonal shape while, viewed from the side or above, the car’s form is elliptical.

Toyota Setsuna: the Car as a Family Heirloom, Crafted in Wood 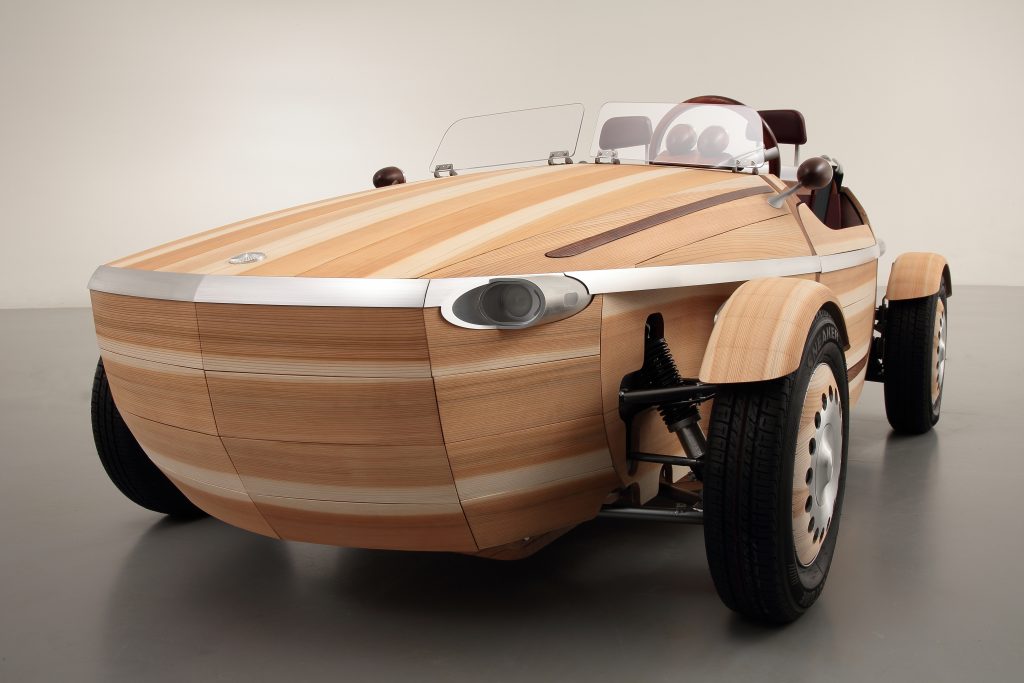 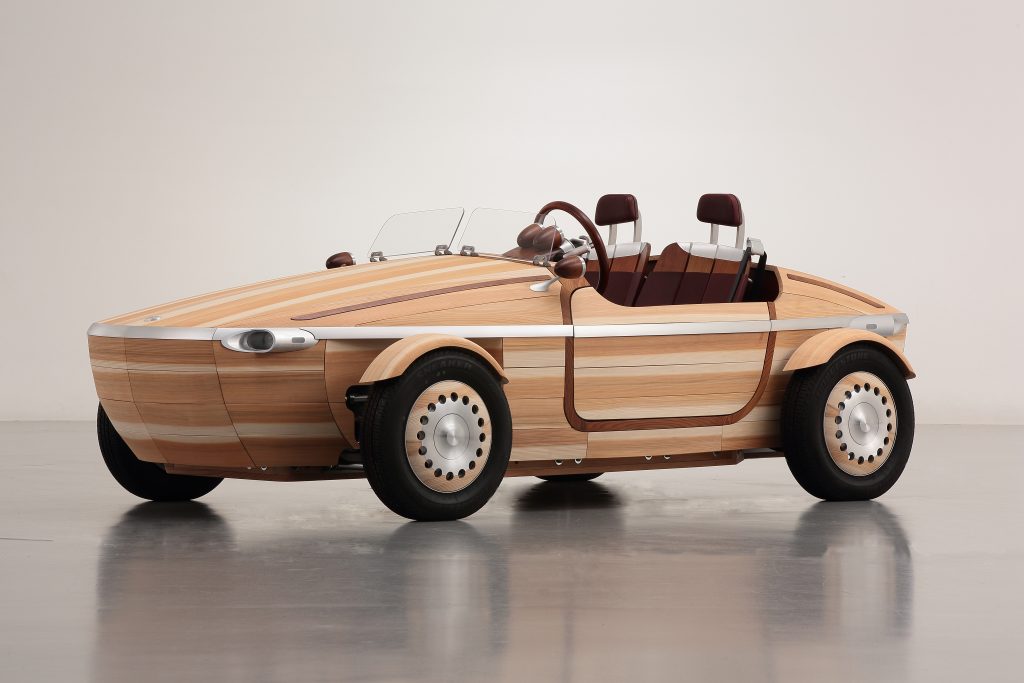 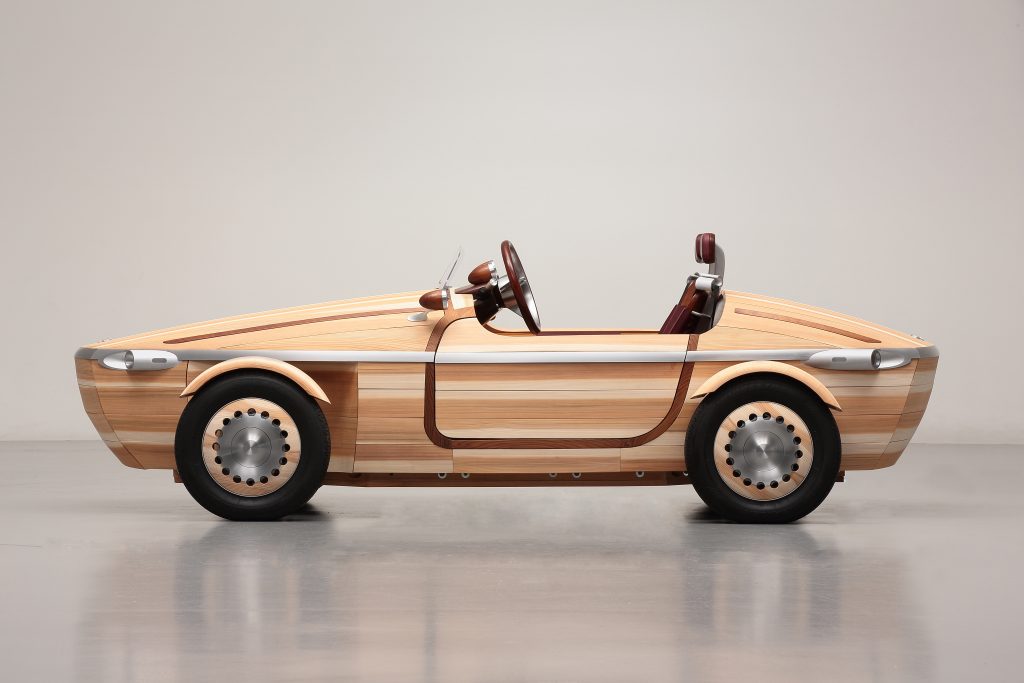 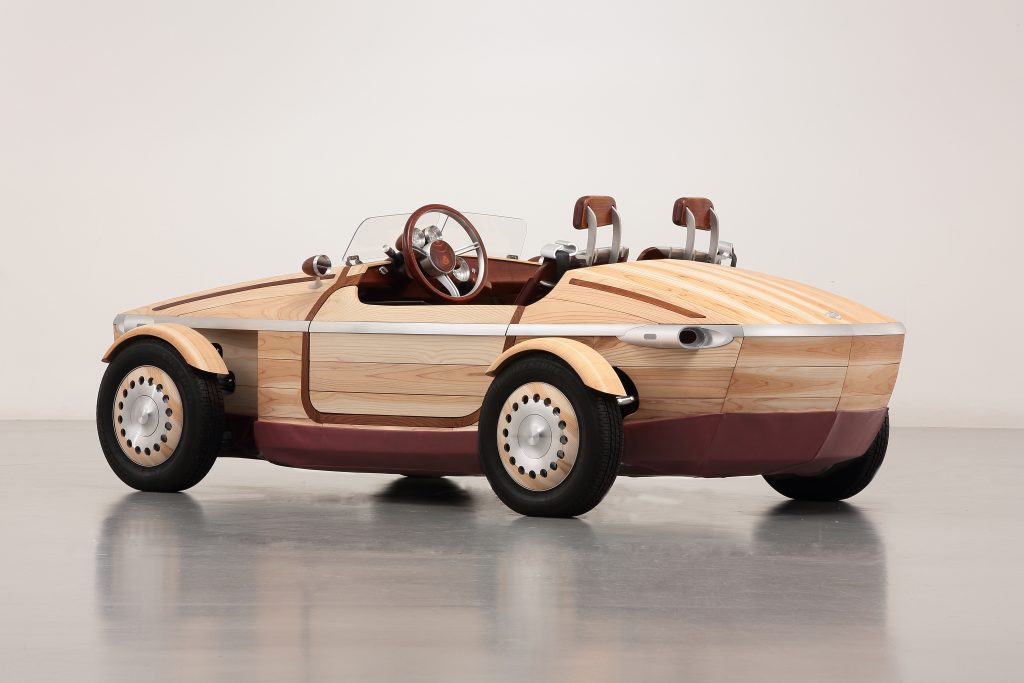 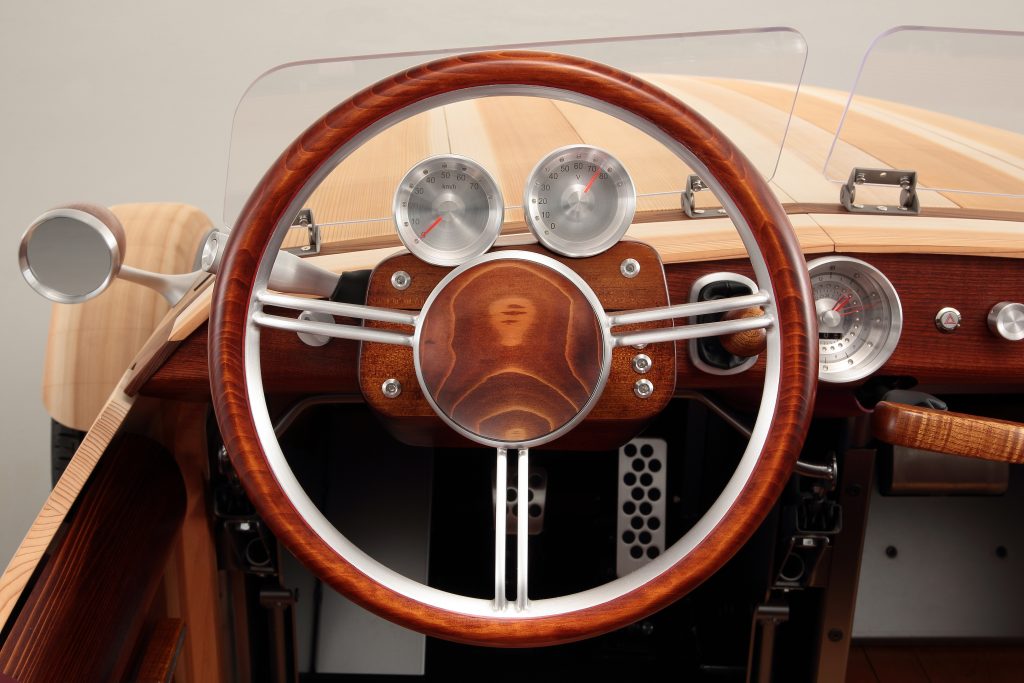 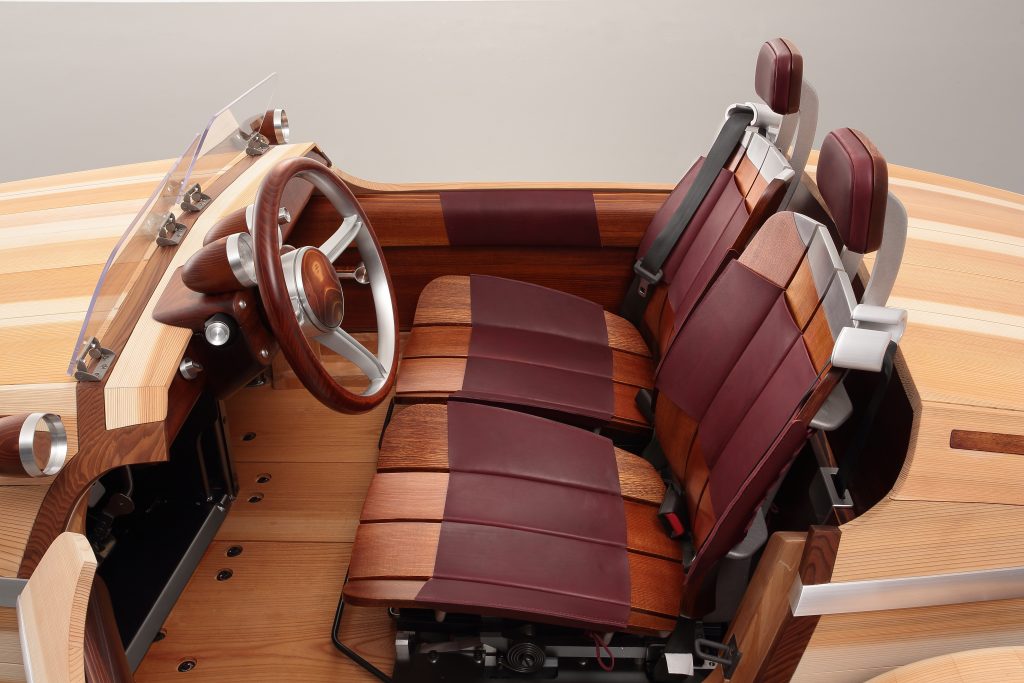 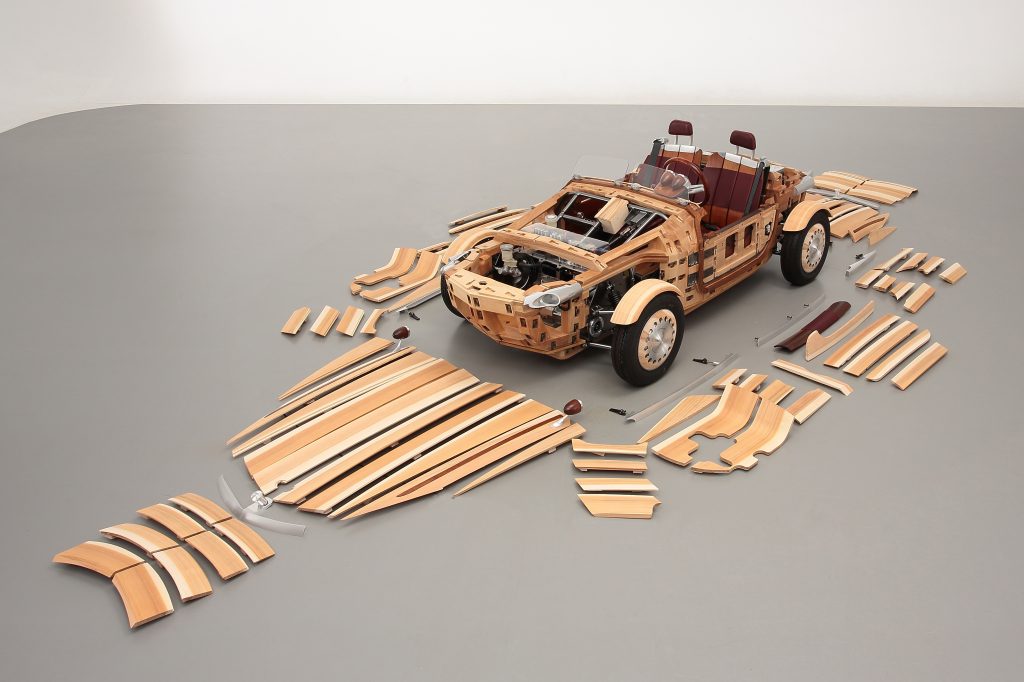 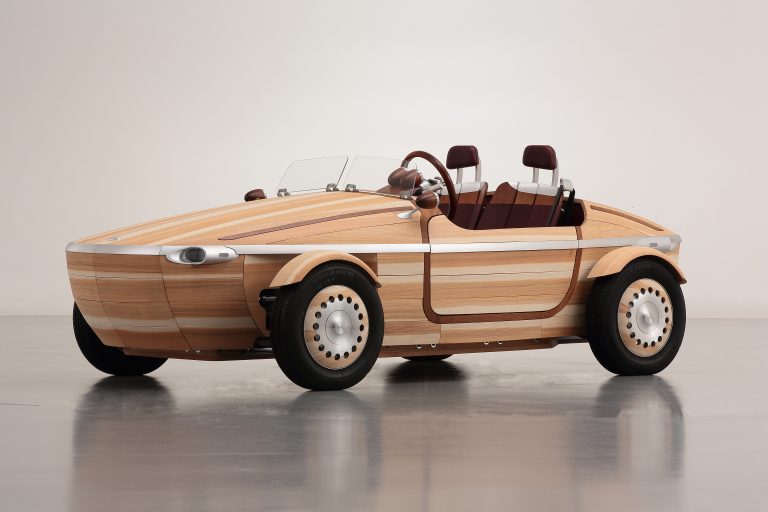