The penultimate stage of Dakar 2022 saw Toyota Gazoo Racing’s Nasser Al-Attiyah and Mathieu Baumel maintain their lead at the head of the field, when they went seventh fastest on Stage 11, just 6min 42sec behind the stage winners. At the same time, their nearest competitors were handed a 5min penalty for speeding in a controlled zone, which helped to increase the GR DKR Hilux T1+ crew’s lead to 33min 19sec in the overall standings.

Henk Lategan and Brett Cummings started Stage 11 three cars ahead of Al-Attiyah and Baumel but pulled over shortly after the start to let the leaders pass. This would allow Lategan and Cummings to assist the leading car, should anything happen during the 215 mile stage which started and finished near the bivouac at Bisha. This gave Al-Attiyah and Baumel some peace of mind, as they picked their way through a tough stage, with many tricky dunes to navigate.

Unfortunately for Lategan and Cummings, the plan came to nothing when they first suffered a puncture, dropping them down in the ranks, before breaking a lower control arm during a dune crossing. The latter problem cost them nearly 2 hours on the stage, and left them well behind Nasser and Mathieu at the end. The pair battled on despite their setbacks and brought the car home safely. They remain out of contention in the overall standings, after losing significant time early in the race.

Stage 11 brought another good result for Giniel de Villiers and Dennis Murphy, who found themselves outside the Top 5 after ten stages. They pushed hard through the tricky stage, posting the fifth fastest time on the day, only 5min 11sec behind the stage winners. This moved them up into fifth place in the overall standings, 12min 42sec behind the crew in fourth place.

Shameer Variawa and Danie Stassen completed the penultimate stage of Dakar 2022 14min 6sec behind the stage winners. This was good enough for 23rd on the day and saw the South Africans in 14th place in the overall standings, 3hr 51min 36sec behind the lead. The pair have steadily improved their stage performances, after a hesitant start to the rally, as well as a run of bad luck early one.

All four Toyota Gazoo Racing cars remain in the rally after 11 stages. Al-Attiyah and Baumel took an early lead after winning both the prologue and the opening stage of the race and managed to maintain their lead throughout the event. De Villiers and Murphy started strong, but lost time due to a broken oil pipe mid-race. They’ve clawed their way back into the top five with just one stage to go.

The final stage of Dakar 2022 is set between the cities of Bisha and Jeddah. At only 102 miles in length, this is the shortest stage of the event, but the team is sure to treat it with the necessary respect. There will be a long liaison of 142 miles before the stage, with another liaison of 177 miles after, taking the crews to the finish podium in Jeddah. The 12th and final stage will bring the total competitive milage of the rally to 2,647 miles, with the overall total, including liaisons, coming to 5,045 miles.

“If someone had offered me the chance to lead the Dakar by more than 30min, with just the final stage to go two weeks ago, I would have grabbed it with both hands. So, I’m ecstatic to be in this position today, thanks to a controlled drive by Nasser and Mathieu. I must commend Henk and Brett on their amazing team spirit today, waiting for Nasser after starting ahead of them, and I’m sorry that they had such a tough day. At the same time, I’m glad that Giniel and Dennis managed to move into the top five, and I’m continually impressed by the steady drive that Shameer and Danie have put in, during the second week of Dakar 2022.”

“It was a difficult stage today, but we’re happy with the result. We lost only a few minutes to Sebastien Loeb, and we are in a good position. Tomorrow is a short stage, and we’ll just continue at this same pace as it is very important to us to win this race. We weren’t worried at all starting today’s stage, as I respect my team, and we have a very good car each day. Our Toyota has been working well, and so have the BF Goodrich tyres. Now, we’re just looking forward to the finish line in Jeddah.”

“A very tough stage today, with many dunes, probably the toughest yet. There were also some very soft, small dunes in the middle, which made things very difficult. But overall we had a nice run, despite struggling with dust because of our road position. But fifth in the stage isn’t bad, and we made up one spot to fifth overall, which is great. I’m a bit disappointed that we’re not on the podium, but this is the best we could do after the time we lost. The most important thing is that Nasser is leading, which is fantastic for the team.”

“It was a tough day for us. Not great, I’m very disappointed. We started this morning fourth on the road, but stopped just after the start to wait for Nasser, in order to follow him through the stage. We struggled to navigate in his dust and lost some time there. Then, we reached some big dunes, and in one crossing we broke the lower control arm on our car. In the process, the brake line to that wheel was also broken, and we had to make a plan with both. We carry a spare control arm, but it isn’t quite as strong as the original part, so we had to nurse the car through the remainder of the stage.”

“Eleven stages done, but today was probably the hardest for us. I think about half of it consisted of dunes, and it was really tough. But I’m looking forward to tomorrow’s final stage. Even so, at 102 miles anything can happen, and we need to keep our wits about us. Dakar is never finished until it is finished, so let’s wait until the end.”

Al-Attiyah/Baumel lead Dakar 2022 with one stage to go 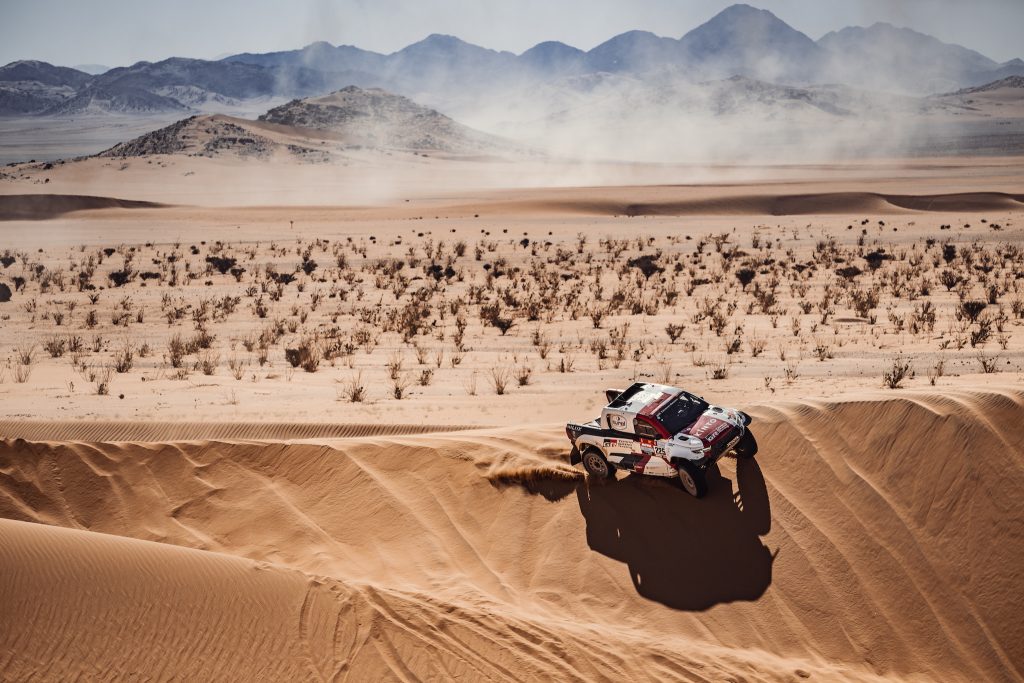 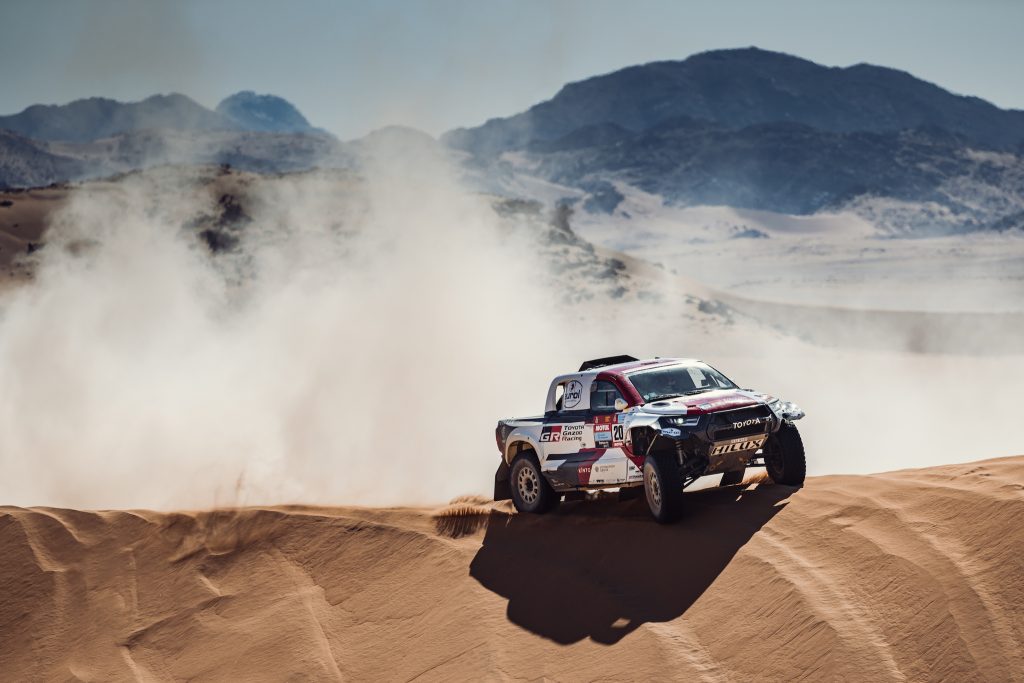 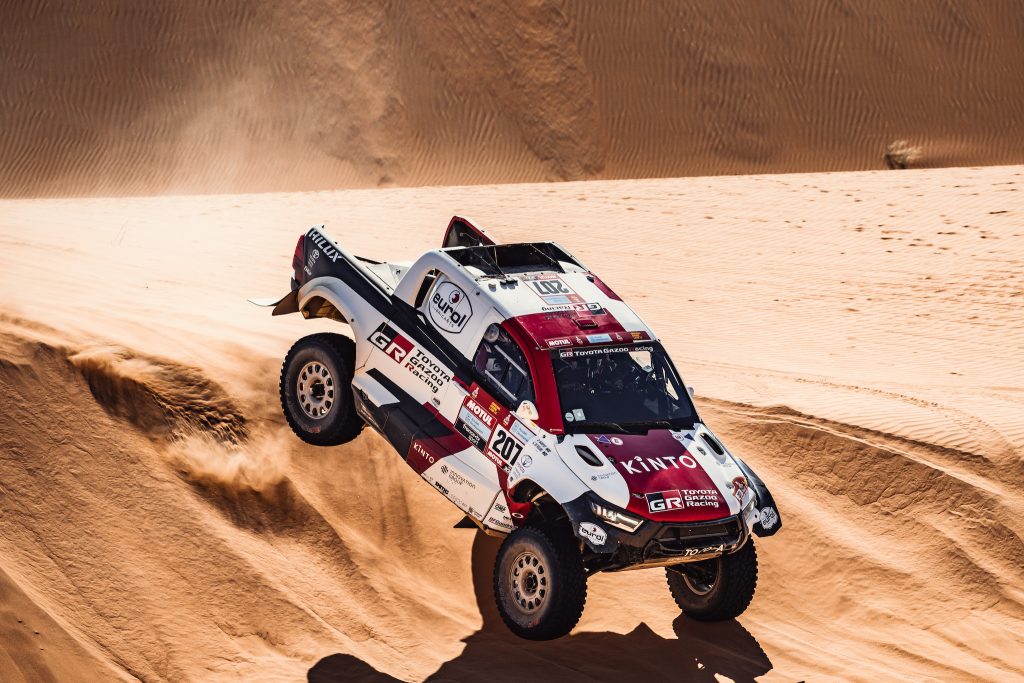 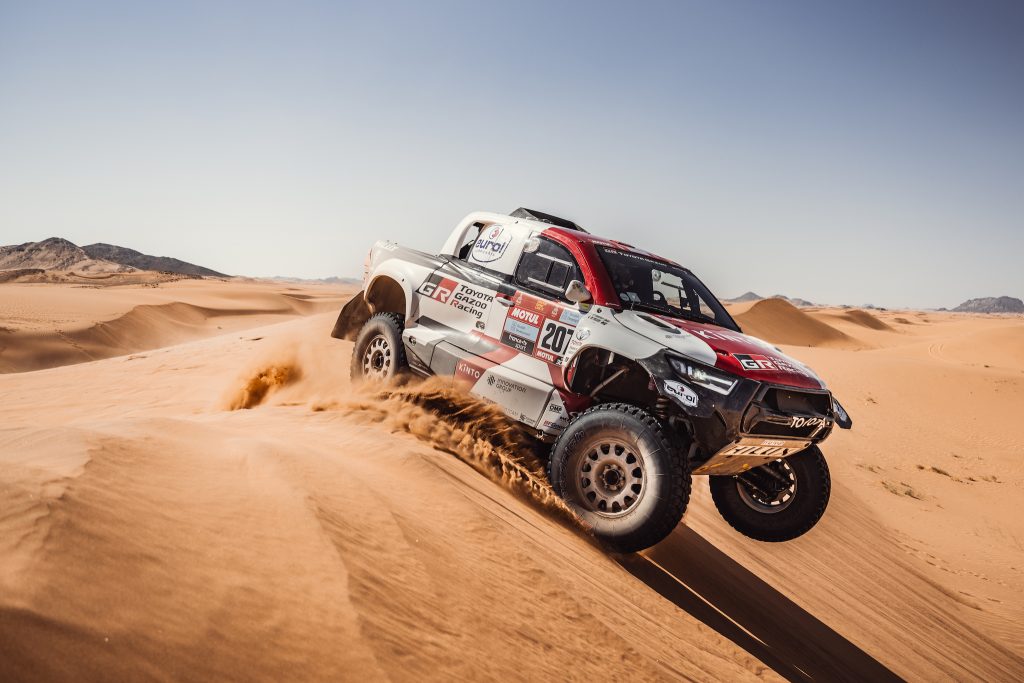 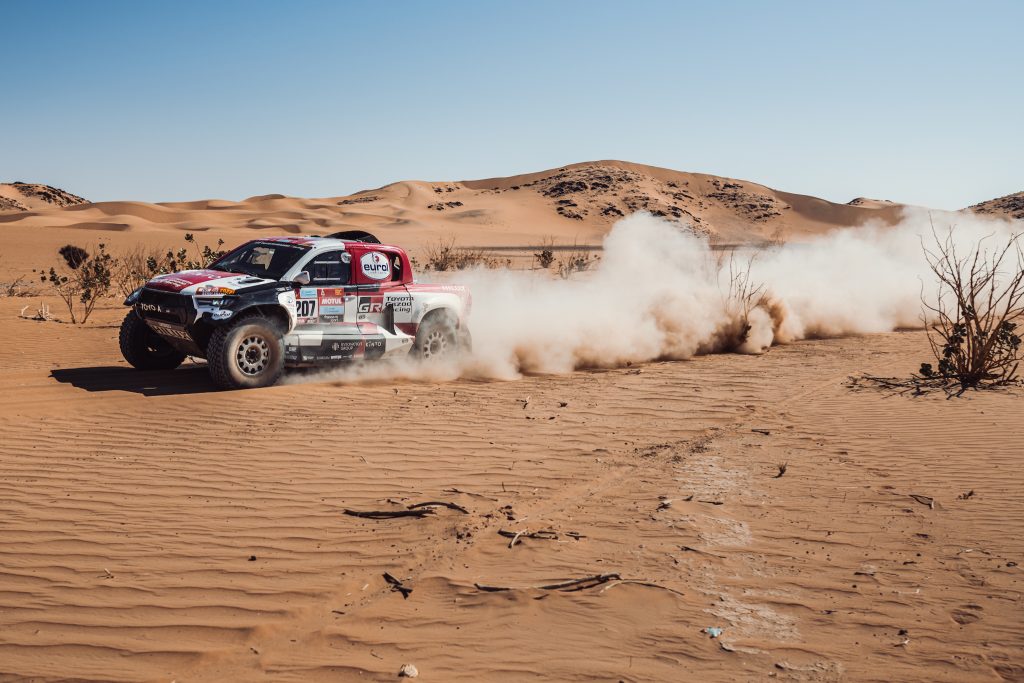 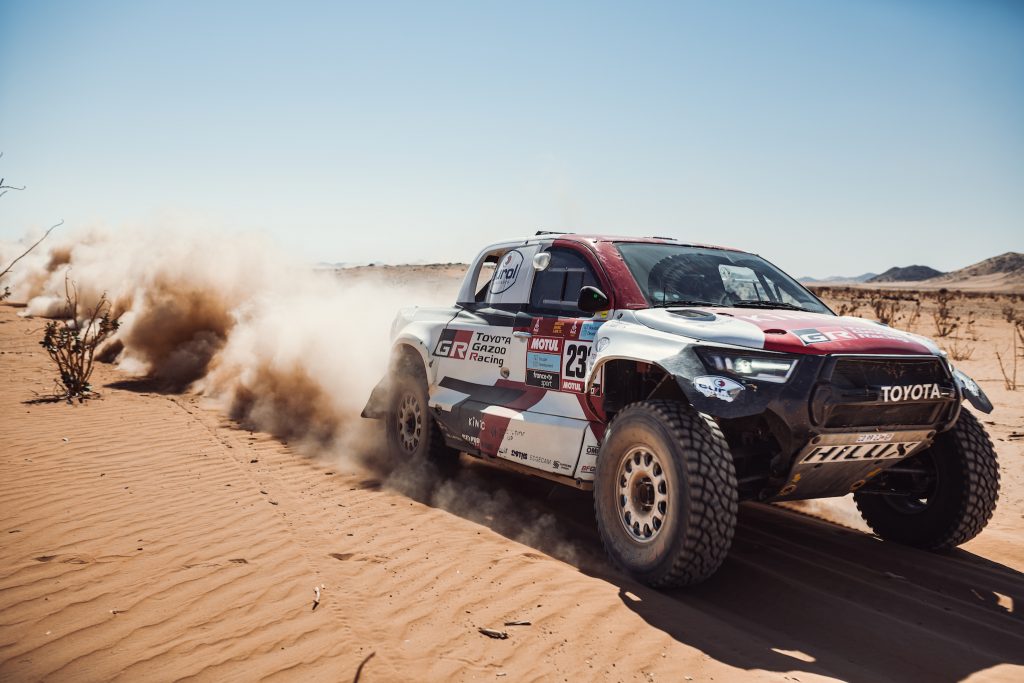