Three Toyota Gazoo Racing cars occupied the podium positions of the ninth stage of the 2022 Dakar Rally, which saw crews complete a looped route starting and ending near the city of Wadi Ad Dawasir.

It was a close-run thing, but in the end it was Giniel de Villiers and co-driver Dennis Murphy who took the honours, just 9sec ahead of teammates Henk Lategan and Brett Cummings. At the same time, Nasser Al-Attiyah and Mathieu Baumel extended their lead in the overall standings to 39min 5sec, with three stages to go.

There are no easy stages on the Dakar Rally, but everything went right for South Africa’s de Villiers and Murphy, when they tackled the 178-mile Stage 9. The pair drove a clean stage, with no punctures, and reaped the rewards when they posted the fastest time of 2hr 23min 8sec, moving them up into fifth place in the overall standings, 1hr 45min 1sec behind the lead.

Almost the same could be said for Lategan and Cummings, except for one puncture. The pair pushed hard in the early parts of the stage and had built a small lead by the time the stage reached its mid-point. But a puncture in the latter part of Stage 9 saw the GR DKR Hilux T1+ crew lose time to the competition. Despite the setback, they pushed through the tricky dunes near the end of the stage, as well as the dust kicked up by fellow competitors, to record the second fastest time on the day, trailing de Villiers and Murphy to the finish by just 9sec. The pair have moved up to 31st in the overall classification and will be aiming for more stage wins before the end of the rally.

The third Toyota Gazoo Racing Hilux on Stage 9 was piloted by overall rally leaders Al-Attiyah and Baumel. The Qatari driver and his Andorran co-driver had a scary stage the day before, due to a noisy rear diff that caused them to drive with caution. But no such problems manifested on Stage 9, and the pair drove at a controlled pace, posting the third fastest time on the day, just 1min 4sec behind de Villiers and Murphy. Crucially, their strong result allowed them to extend their lead in the overall standings to 39min 5sec, with three stages to go.

Shameer Variawa and Danie Stassen continued their run of strong performances, going 11th-fastest on Stage 9, trailing the stage winners by 4min 38sec. The South African pairing also reported a puncture-free run, and while they remain in 14th place overall, some 3hr 25min 15sec behind the lead, they are closing in on the crews ahead of them and are now just 26sec behind 13th place.

Just three stages remain in the 2022 Dakar Rally. Stage 10 will see the Dakar caravan move from the bivouac at Wadi Ad Dawasir to a new location near the city of Bisha. For the race crews, the stage consists of a timed section covering 233-miles, with liaisons totalling 238-miles joining the stage to the two bivouacs. The organisers have promised an eye-pleasing stage, but cautioned the competitors that, even though the stage will feature high speeds, navigation may still play a pivotal role.

The 2022 Dakar Rally will reach the city of Jeddah on 14 January, after 12 competitive stages that covered a large part of Saudi Arabia, including a visit to the capital city of Riyadh.

“What an epic day for the team! We’ve never achieved a 1-2-3 on a Dakar stage before, and we are ecstatic with today’s results. Giniel and Dennis drove a perfect stage to get the win, but Henk and Brett were right on their tails. Were it not for a puncture, Henk may well have recorded his second win of the event. But more than that, we are very pleased that Nasser and Mathieu were able to build on their lead, heading into the final stages of the rally.”

“Today we had a really good run, without having to push, and finished third in the stage. Now, we have a really good lead and I’m confident with my Toyota after today, when it was clearly in very good shape. It’s also great to record a 1-2-3 for Toyota Gazoo Racing, and even though we aren’t there yet, each day feels like a small victory, as we get closer to Jeddah.”

“It is really nice to win a stage, especially after yesterday’s tough stage. But the team worked all night to sort out the problems with our dampers, which had gotten steadily worse over the last few days. They really did an amazing job, and thanks to them the car was perfect today. We had a nice, clean run on the stage and we’re very happy to get another stage win for Toyota.”

“We had a very nice stage today, starting off quite well. On previous days we tended to be slightly ahead at the neutralisation, but then it seemed like the other guys started pushing. Today, we pushed a bit harder early on, and built up a lead by the mid-point. Unfortunately, a puncture slowed us down somewhat, allowing Carlos (Sainz) to come past. We followed him through the tricky dunes near the end, and then just stayed in his dust to the finish. This made it a bit hard to see the rocks on the route, but we’re happy to have made it through in a good stage time.”

“Today was a good stage for us. We just kept it clean, and even though we had a lot of dust, we managed to overtake three or four cars. It was hair raising at times, but we’re here and we’re happy.” 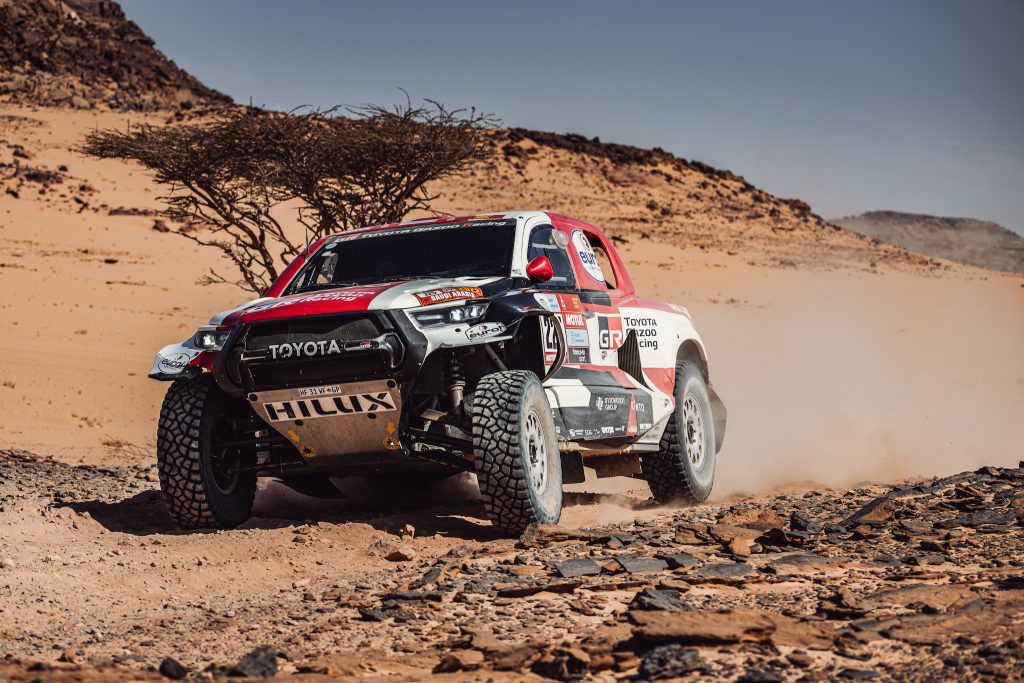 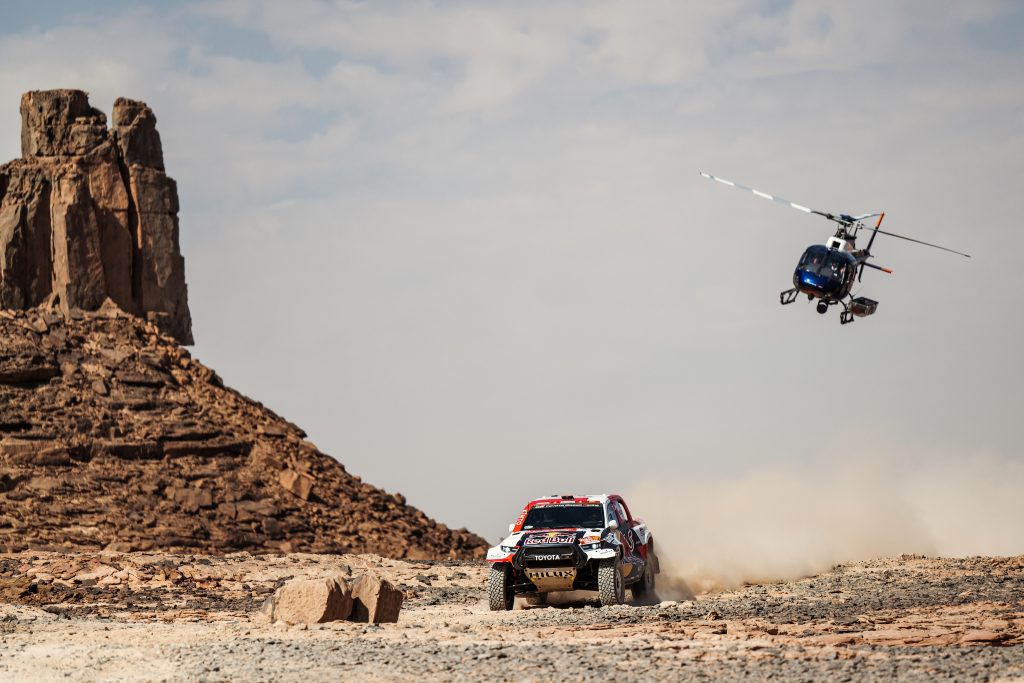 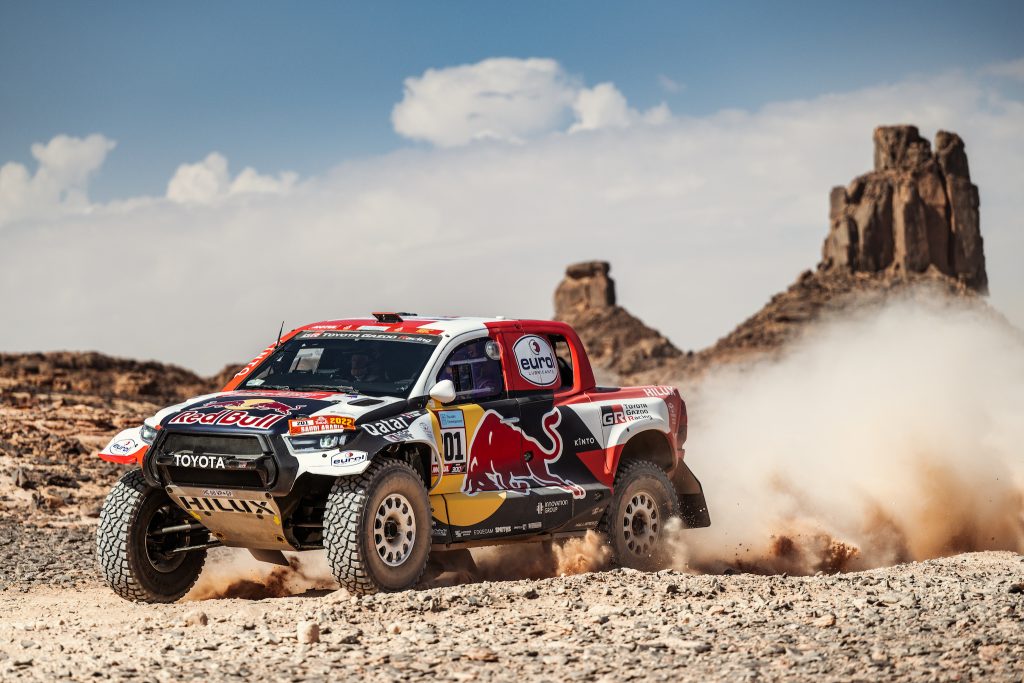 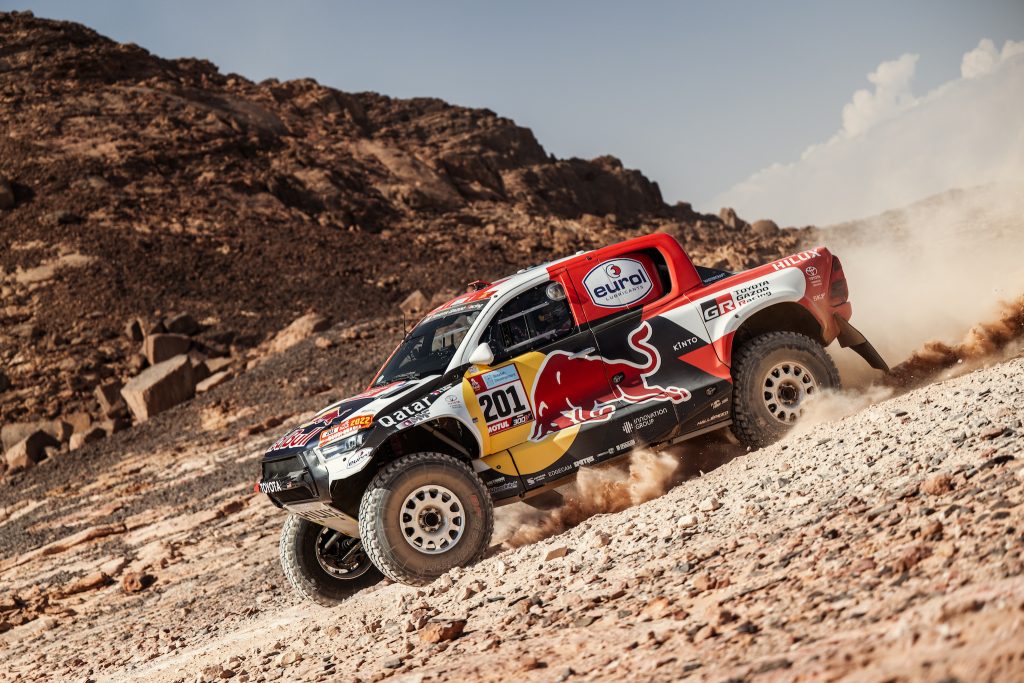 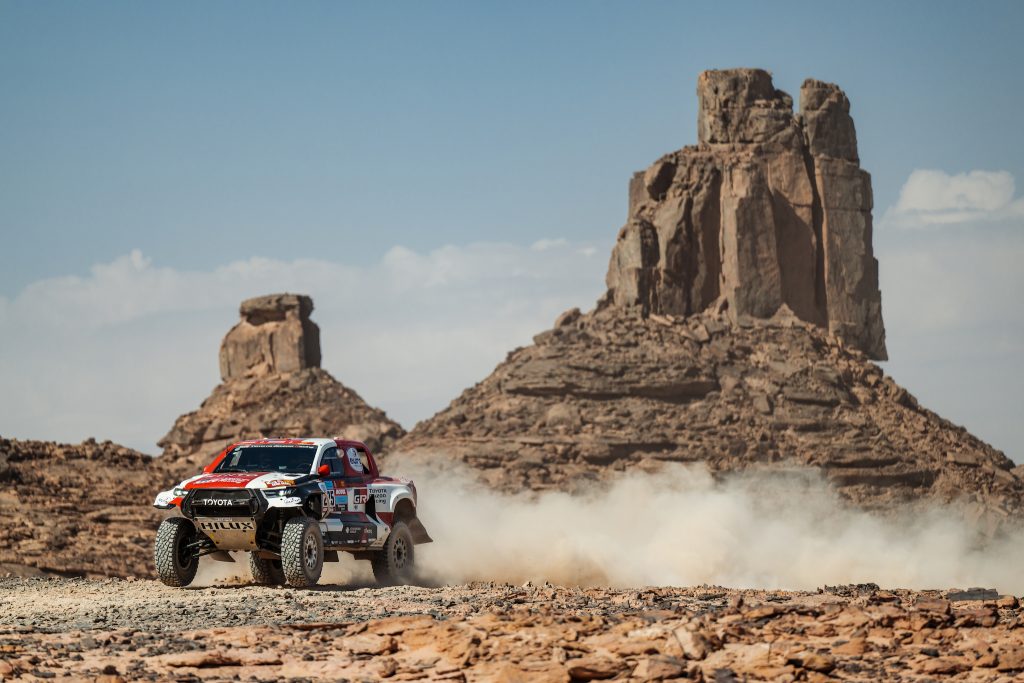 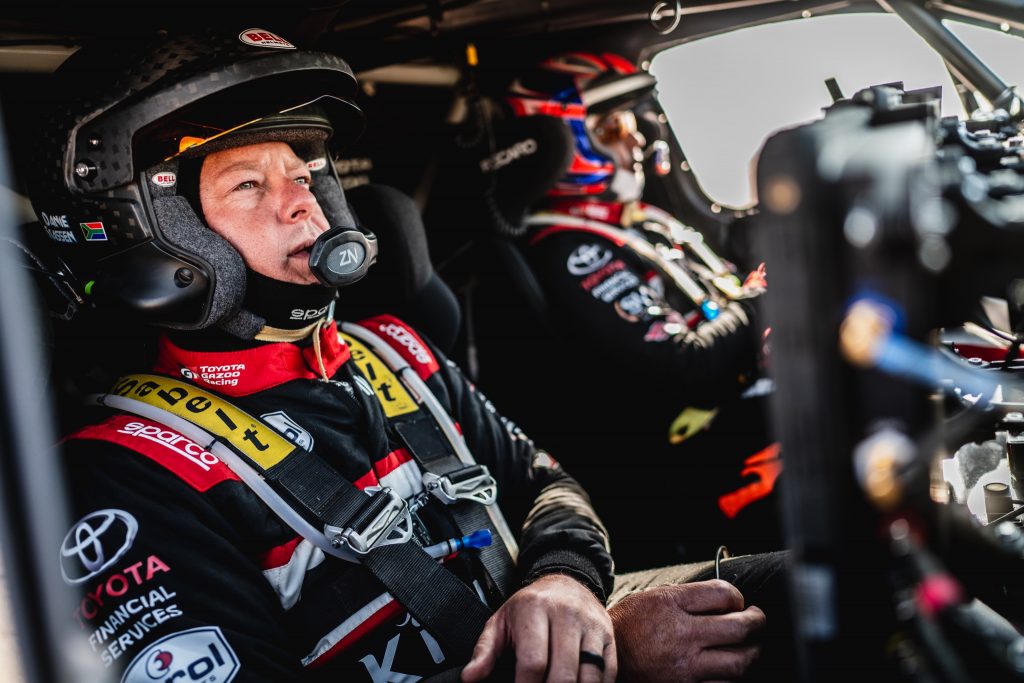 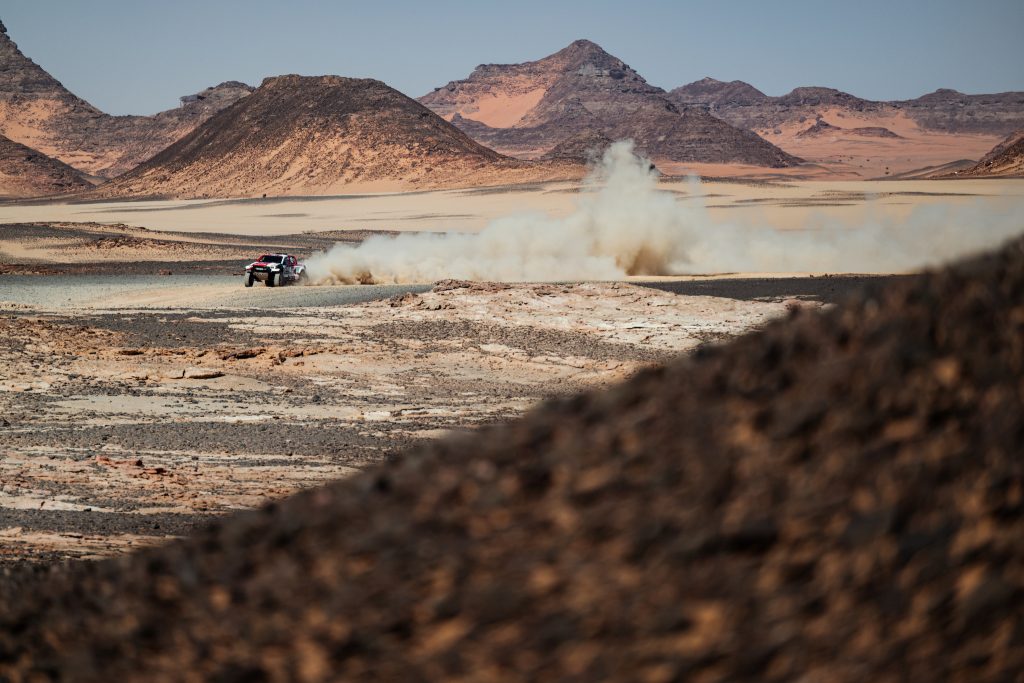 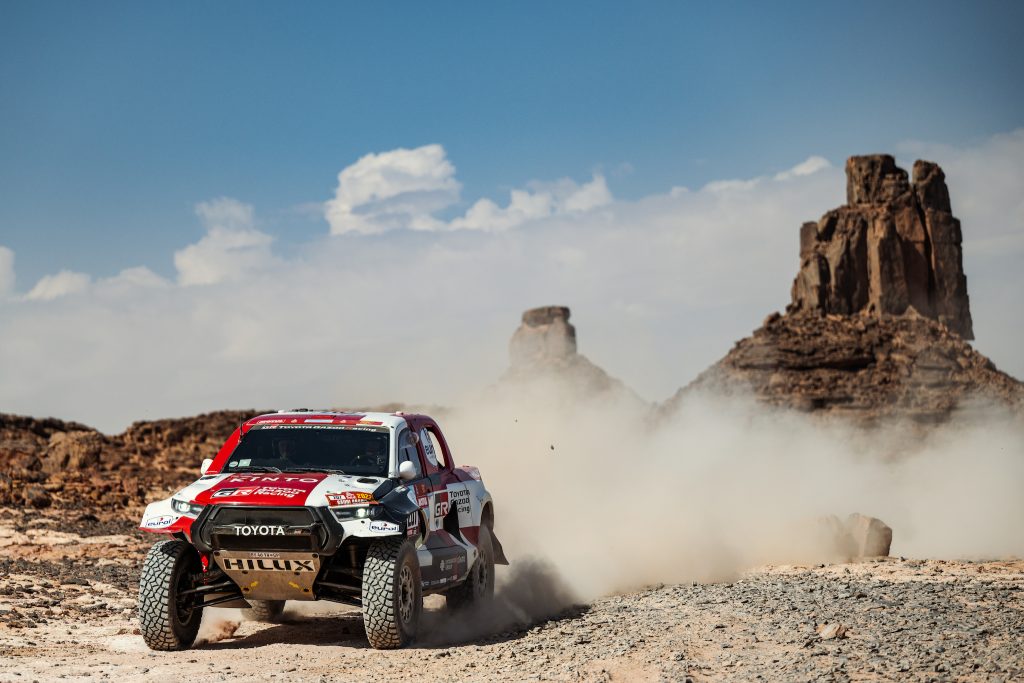 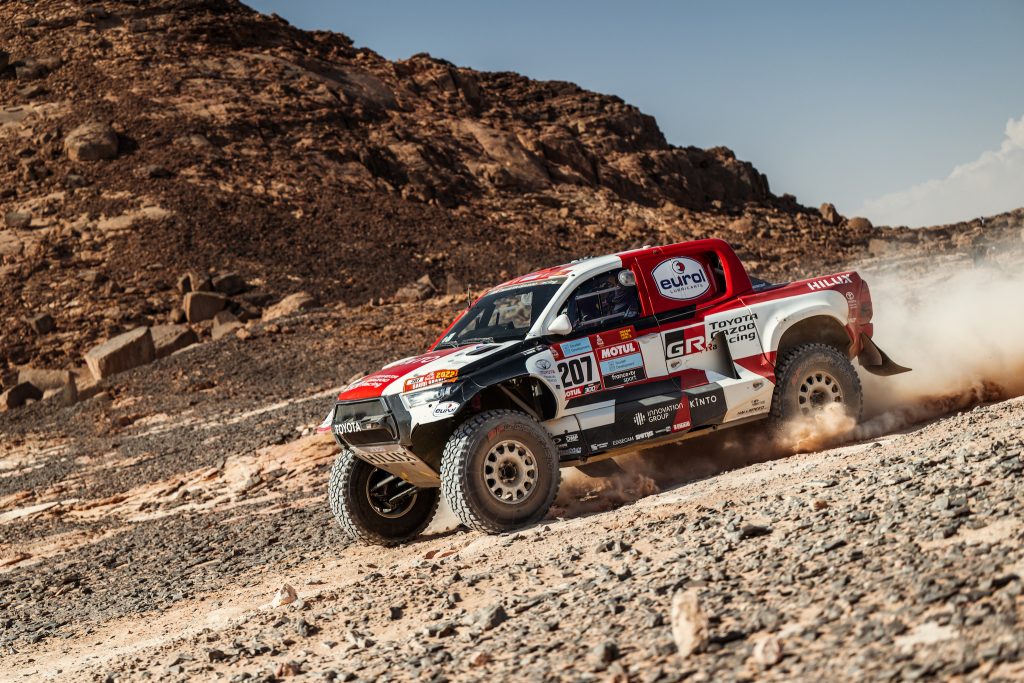