The Toyota Gazoo Racing World Rally Team are celebrating a fourth home victory on Rally Finland thanks to an outstanding performance by Elfyn Evans and his co-driver Scott Martin.

The British duo are now the only crew who can prevent team-mates Sébastien Ogier and Julien Ingrassia – who finished fifth in Finland – from winning the WRC drivers’ championship. With two rounds remaining, this means a Toyota driver is now guaranteed to win the title for a third year in a row. The team have also taken a step closer to clinching the manufacturers’ championship.

In the first Rally Finland to be held for over two years, the team faced tougher competition on the high-speed gravel roads. Evans was their best-placed driver at the end of the opening day on Friday, in third overall. On Saturday morning he surged into the lead with four stage wins out of four, and he took an advantage of 9.1 seconds into the final day.

The result means that the Toyota Yaris WRC – built in the rally’s home city of Jyväskylä – maintains its unbeaten record on its home roads since its debut in 2017. This was the car’s 25th WRC victory and the 200th WRC podium for Toyota, which becomes only the third manufacturer to reach that figure.

With his second win of the season, Evans reduced the gap to championship leader Ogier to 24 points with a maximum of 60 still available. In the manufacturers’ championship, Toyota’s lead has increased to 61 points.

Ogier succeeded in his main aim this weekend of reaching the finish and banking more points towards the championship. Finishing one place ahead of Ogier in fourth overall were Esapekka Lappi and Janne Ferm in a privately-entered Toyota Yaris WRC – a strong return to the car with which they claimed a home victory four years ago.

After having to retire from the action during Saturday, both Kalle Rovanperä and TGR WRC Challenge Program driver Takamoto Katsuta were able to restart on Sunday and gain further experience from their maiden Rally Finland starts in the top category of the WRC.

Akio Toyoda (Team Founder)
“This season, we were supposed to have four home rallies: in Japan where the Yaris is developed and produced, in Estonia where the team has a factory, and twice in Finland where the team is based. We took second place in the first one, the Arctic Rally, and Kalle and Jonne won the second one in Estonia. This Rally Finland took place in Jyväskylä, where the team is located, so it’s the ‘real’ home event. Since Rally Japan has been cancelled, we definitely wanted to win this rally.

“I imagine not only the crews and Jari-Matti but everybody in the team had more pressure than usual. Elfyn and Scott did a great job under the circumstances and brought lots of smiles to the fans in our hometown. I feel we were able to give back to the place where the Yaris WRC was born and to the roads which made it strong.

“I’m grateful to Elfyn, Scott, and the whole team. So far this season, Elfyn and Scott have not had to retire and have always driven through to the Power Stage. The Yaris WRC has certainly become stronger thanks to that and I really appreciate it.

“Seb and Julien secured important points with their consistent driving despite the difficult road order. I hope Seb will show us his strong drive in the last two events to finish the season in the best way.

“Kalle and Takamoto were really looking forward to driving on their familiar Finnish roads, but it turned out to be a regrettable event for them. However, they both learned from the experience and they will bring smiles to the local fans there in the future.

“There are only two events left in the season. The team will come together led by Jari-Matti and make it through to the end. I really hope our fans and the whole team will all be smiling at the end of the season!”

P.S. to Jari-Matti
“How was the feeling when you are not holding a champagne bottle on your own? I was thinking of the podium I stood with you on over there three years ago. Like I said before, you were the very first person I sprayed the bottle that Ott handed to me. I was that happy to stand on the podium with you. Now that you are on the management side we probably won’t be on the same podium together anymore, but I’m looking forward to working with you again on site. I really hope the day will come soon. We can negotiate which one of us climbs up to the podium when the time comes!”

P.S. to Esapekka and Janne
“Although the colour was different to ours, I was happy that you could drive the Yaris WRC again in your home country. When we returned to the WRC in 2017, it was you two who brought the team’s second victory at Rally Finland. Unfortunately you missed the podium this time, but you still showed us a great run. Congratulations! I’m looking forward to hearing how you felt driving the Yaris WRC again after three years.”

Jari-Matti Latvala (Team Principal)
“To win Rally Finland is always very special and even more so for our team, so we are really happy to win here again. The competition was stronger here this year, but Elfyn’s performance shows that we had a fast car. He was not necessarily one of the favourites to win but he proved that he was the fastest driver this weekend. He did an incredible job. In the Oittila stage in the dark on Friday night he found another gear and showed his confidence, and after that he was able to take the lead and control it. He can be very proud of his victory. In the drivers’ championship it’s now only between Seb and Elfyn, and the manufacturers’ championship is also looking very good for us.”

Sébastien Ogier (Driver car 1)
“Today for us was all about trying to get some more points in the Power Stage. Unfortunately, we had a problem just after the start of the stage, so we couldn’t set a good time. This was not our rally but that’s how it is sometimes. We have to move on. We are still in a good position in the championship and I am really looking forward to Spain and to asphalt. I know what I have to do there. Elfyn did very well this weekend, so well done to him.”

Elfyn Evans (Driver car 33)
“It feels pretty special to win for the team on its home rally. After a difficult rally for me in Estonia on roads with similar characteristics, it feels really good and especially the way we managed to do it. We made some changes to the car during our test and I found great confidence with it pretty early on Friday. I’m really happy and thankful for the team for all their work, it’s been a great weekend. I feel fortunate to have been able to drive this car on these roads, and to take the win is extra special. It’s a positive result in terms of the championship. The drivers’ title is still a long shot for me, but we’ll keep giving our best on every event.”

Kalle Rovanperä (Driver car 69)
“For us we just had to drive through the stages today. The team did a great job fixing the car yesterday but the damage was quite big and the car wasn’t a hundred per cent, so we had to take care not to jump or stress it too much. I also had pain in my back from yesterday. So we just drove through to be there to score some manufacturers’ points if it was needed. Congratulations to Elfyn, he did an amazing job. For me this was a difficult weekend where we had been expecting a lot, but I’m looking forward to Spain.”

(Results as of 15:30 on Sunday, for the latest results please visit www.wrc.com)

What’s next?
Rally de España will be the penultimate round of the season on 14-17 October. Based in Salou to the south of Barcelona, the event is returning to the calendar after a year away and will be held on fast and smooth asphalt roads – similar to a racing circuit in their characteristics – after several years as a mixed-surface challenge.

Flying Evans Delivers Another Home Win for the Yaris WRC 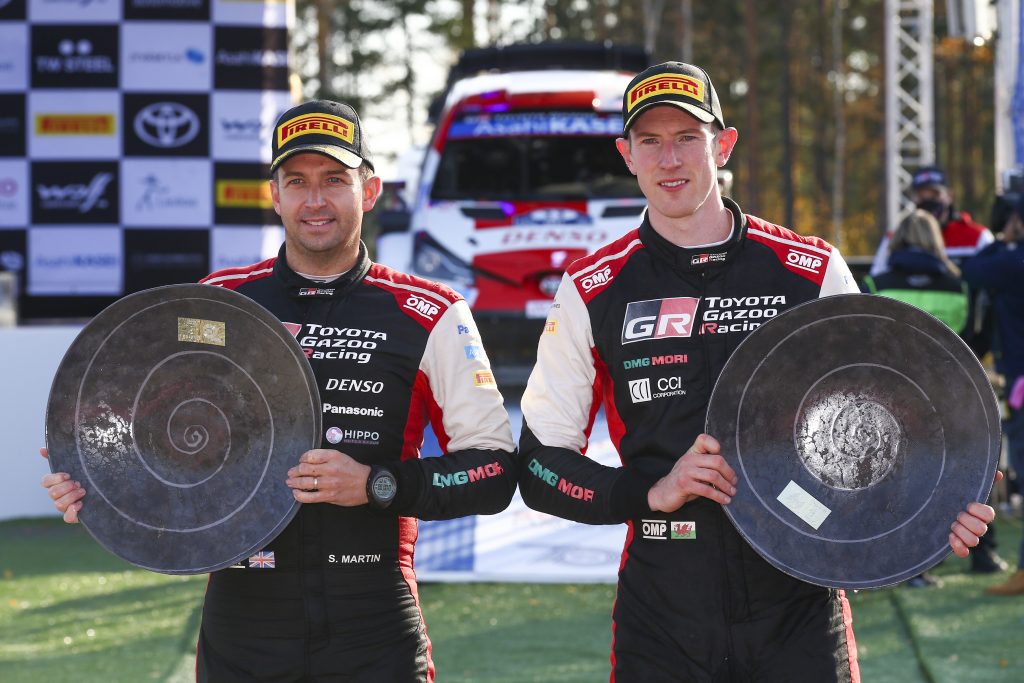 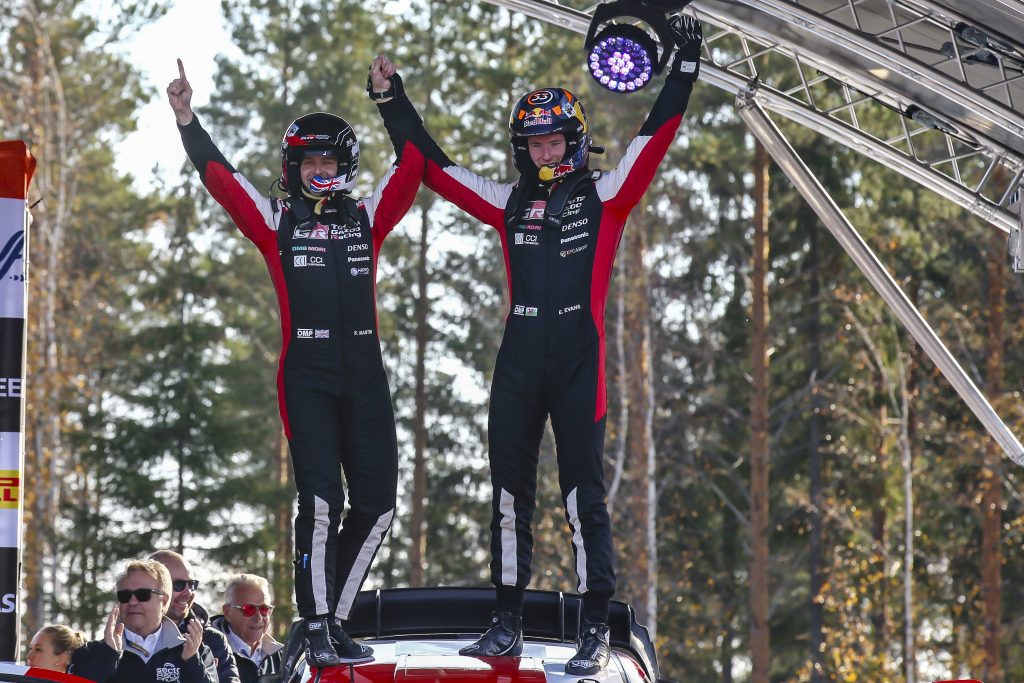 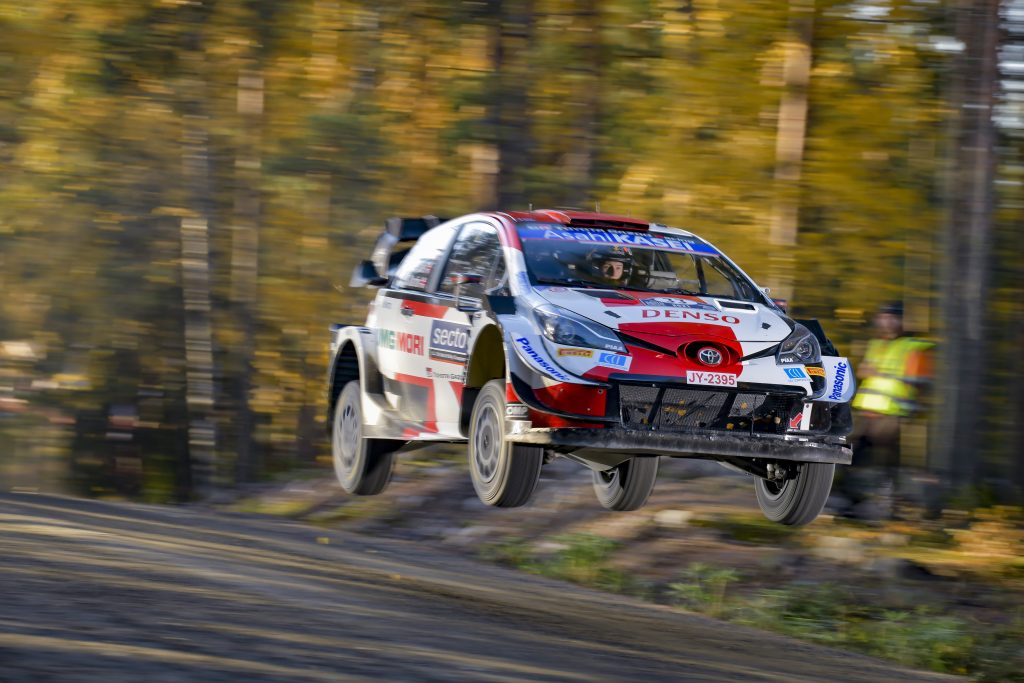 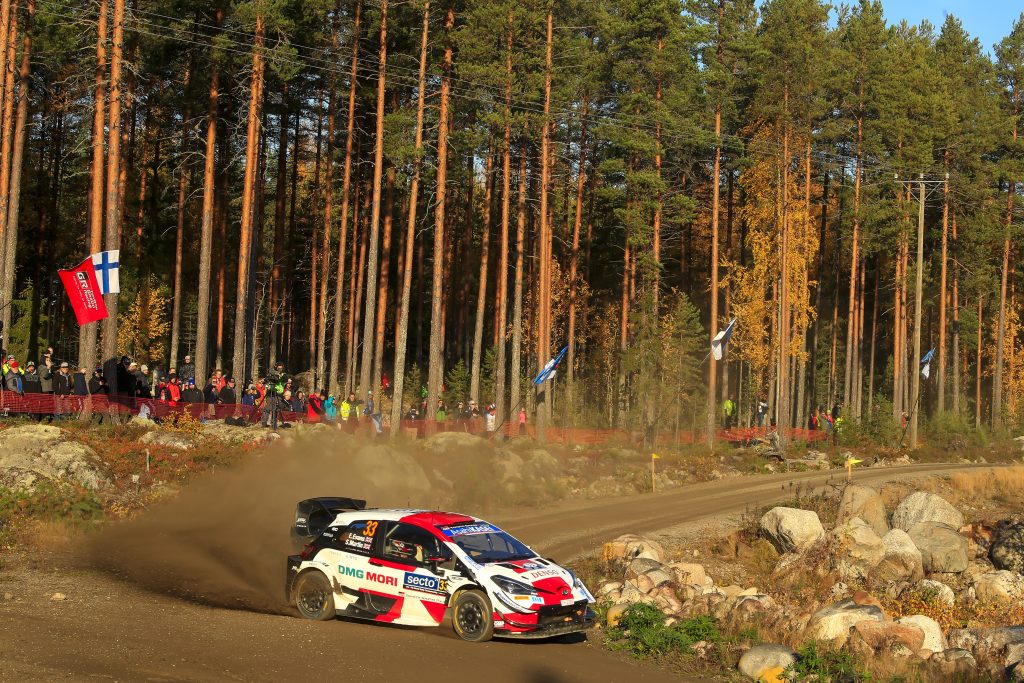