Toyota Gazoo Racing extended their 100 per cent winning record with the new GR010 Hybrid  Hypercar  with a hard-earned victory yesterday (18 July) in an enthralling 6 Hours of Monza, the third round of the 2021 FIA World Endurance Championship (WEC).

Mike Conway, Kamui Kobayashi and José María López, in the No7 GR010 Hybrid overcame challenges and strong Hypercar competition to earn their first victory of 2021, beating the No36 Alpine by 60.9 seconds after 204 laps.

Sébastien Buemi, Kazuki Nakajima and Brendon Hartley saw their winning run come to an end due to technical issues on their No8 GR010 Hybrid.

With this result, Toyota Gazoo Racing have extended their lead in the manufacturers’ World Championship to 30 points over Alpine. Meanwhile the fight for the drivers’ crown has tightened, with the No8 crew now leading by only six points from their No7 team-mates, the reigning champions.

The race initially appeared to be a close battle between the two GR010 Hybrids when Conway led the early stages in the pole-sitting No7, followed closely by Buemi. Only a few seconds separated them during their first two stints but all that changed around 90 minutes into the race, just as Hartley took the wheel of the No8.

A fuel pressure issue required him to make a four-and-a-half-minute pit stop. After returning to the track in 21st position, further misfortune struck immediately when the front-left corner required replacement due to a damaged hub. That cost the No8 car 12 laps and any chance of victory.

López built a lead over the chasing pack and, despite a safety car period due to debris on the track, he held a 22 second lead at half distance. But the dramas continued for the sister Toyota, which required a complex fuel system repair which cost 48 minutes.

The race took further twists after Kobayashi took over the wheel of the leading No7. With less than two hours to go, the car came to a stop on the side of the track. Kobayashi performed a power cycle and resumed, having lost around a minute and the lead of the race to the No709 Glickenhaus.

But that car only a few minutes in front though, before itself pitting for repairs. Kobayashi thus reclaimed the lead until a puncture required a tyre change, allowing the leading Alpine to move into first place.

Kobayashi cut into the Alpine’s advantage before handing over to Conway, who set the fastest lap of the race as he continued to hunt down the leader. A full course yellow caution period with 34 minutes to go gave the No7 a chance to make its final fuel stop and secure the lead, which Conway held until the chequered flag.

The team will now investigate the technical issues that arose in detail back at its Cologne base as it prepares for the most important race of the season, the Le Mans 24 Hours on 21-22 August. Action starts at the La Sarthe circuit with the official test day on 15 August.

Kamui, Mike, José,
Congratulations for winning! I’m glad that Car 7 won its first victory with the new car! And I was a little relieved that you finally won.

However, even Car 7 did not finish without trouble. The sister Car 8 had various troubles and lost a lot of time. We were not able to prepare a car that you can drive without reliability concerns so I’m sorry to all the drivers.

But, the GR010 Hybrid is a car that has just started the process of development through racing. The troubles were obvious in the race. There are good and bad types of trouble; the good ones help us to learn but any bad ones should be solved by Le Mans next month.

No matter how much preparation is done, the unexpected can always happen in a race. Kazuki stopped just minutes before the end in 2016. Kamui had a problem at the exit of the pit lane a year later. We have experienced unexpected events often.

To all team members,
Please listen the voice of the drivers, who are the ones ‘talking’ with the car and the road. That is only way to make the car stronger. Please make an ever-better car for the drivers to fight with an easier and better feeling.

Kazuki, Séb, Brendon, Kamui, Mike, José,
Your voices will strengthen the car. Whenever you hear even the smallest voice from the car, tell the mechanics or engineers.

Let’s make this car much stronger, as one team.

Hisatake Murata, Team President: “It has been a positive day for Toyota Gazoo Racing; congratulations to the No7 car and also our colleagues in the World Rally team for their victory in Rally Estonia. The first WEC race at Monza will be remembered as a particularly exciting one, and I am happy that we had fans in the grandstands again to enjoy it. The No7 crew showed true fighting spirit and they really deserved their first win of the season. It is frustrating to suffer issues with the No8 car; sorry for Sébastien, Kazuki and Brendon that they were not able to fight for another victory today. But thank you to the mechanics for never giving up and getting the car back on track; this required a big team effort. Our full focus switches to Le Mans now, where we will defend our title and aim to become the first Hypercar winner. There is a lot of hard work ahead for us to achieve that goal.”

Mike Conway (GR010 Hybrid No7): “It’s great to get a win here in Monza because it’s a great track and the fans were back as well. The car felt solid all weekend and, as the weekend went on, it just kept getting better. I am happy with the race pace we had; we were able to pull away when we had to. At the end it was a bit touch and go obviously with the problem that Kamui had and also the puncture, but it didn’t change the result, it just made it a bit more interesting. To come home with our first win of the season is great. It’s a pity for the No8 car, they had a bruising day, but I’m really happy with the job we did on our car.”

Kamui Kobayashi (GR010 Hybrid No7): “We were strong all weekend, as we have been in the first two races of the season. Obviously we had bad luck up until now, and even today we had some problems, but still we managed to win. I think this weekend shows we still need to work hard for Le Mans, because we can’t afford reliability problems there. I think the No7 car is really getting stronger and we are working well with the team, so I think we are going to have a big chance at Le Mans. For today I am very happy to have won in Monza and this momentum is very important going into the big race.”

José María López (GR010 Hybrid No7): “This is endurance racing and things can happen and today pretty much everything happened. It was a crazy race, but we managed to bring the car home and win the race. It’s not always the case that the quickest car wins but we had a very strong weekend and that is very motivating for Le Mans. To be fastest in all the sessions, take pole and win the race doesn’t happen very often, but I am very proud of the job Kamui and Mike did as well. The whole team, the engineers and the mechanics have performed really well. It’s been a tough race for the team overalls, but we will come back stronger for Le Mans.”

Sébastien Buemi (GR010 Hybrid No8): “That was a really difficult race for us but we did what we could. We were running comfortably in second place and quite close to car No7. Then we started to have issues, with the fuel system and then with the hub. In a six-hour race you cannot recover from problems like that; there was not much we could do. It’s a tough one because we didn’t score many points for the championship. I hope we have got our problems out of the way and won’t have them at Le Mans.”

Kazuki Nakajima (GR010 Hybrid No8): “By the time I got in the car we had already lost so much time with the repairs, it was just a matter of getting safely to the chequered flag. Thanks to the mechanics for all their hard work to make sure we could finish the race and congratulations to car No7. They drove a great race and I am pleased for the team to win again. I hope for a smoother race at Le Mans.”

Brendon Hartley (GR010 Hybrid No8): “This was definitely not our day. But it is better we had a day like this here in Monza rather than at Le Mans. That is the one race of the year we really want to win. We had a few issues with the fuel system which needed repairs, and then with the hub. We’re still in the fight for the World Championship even though obviously we lost a lot of our points advantage, but that’s motorsport, we know how it goes and we’ll come back fighting at Le Mans.” 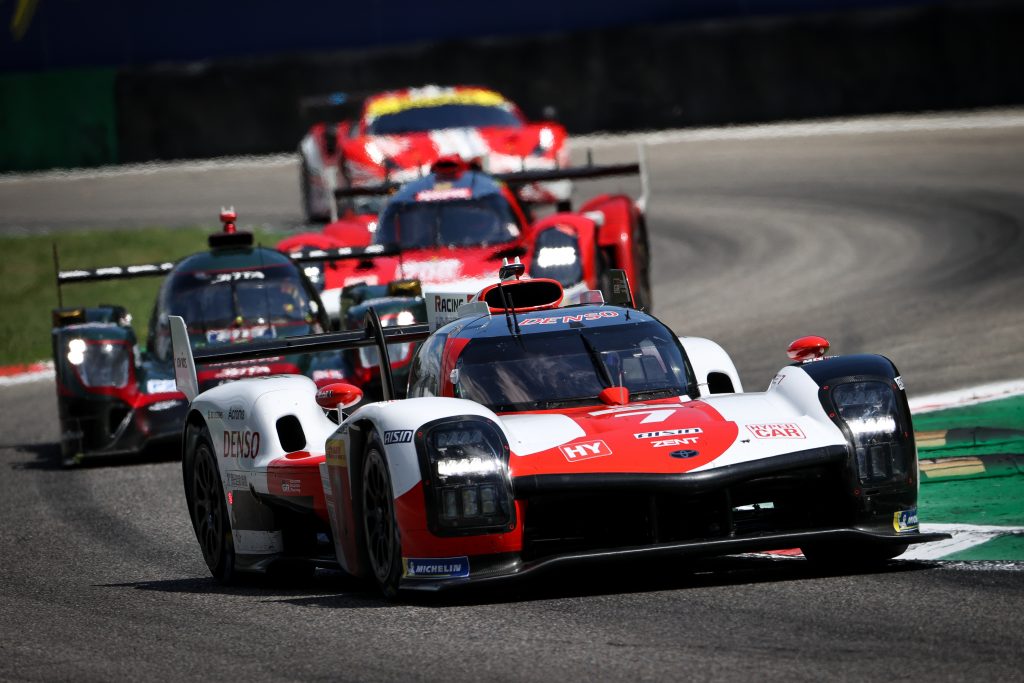 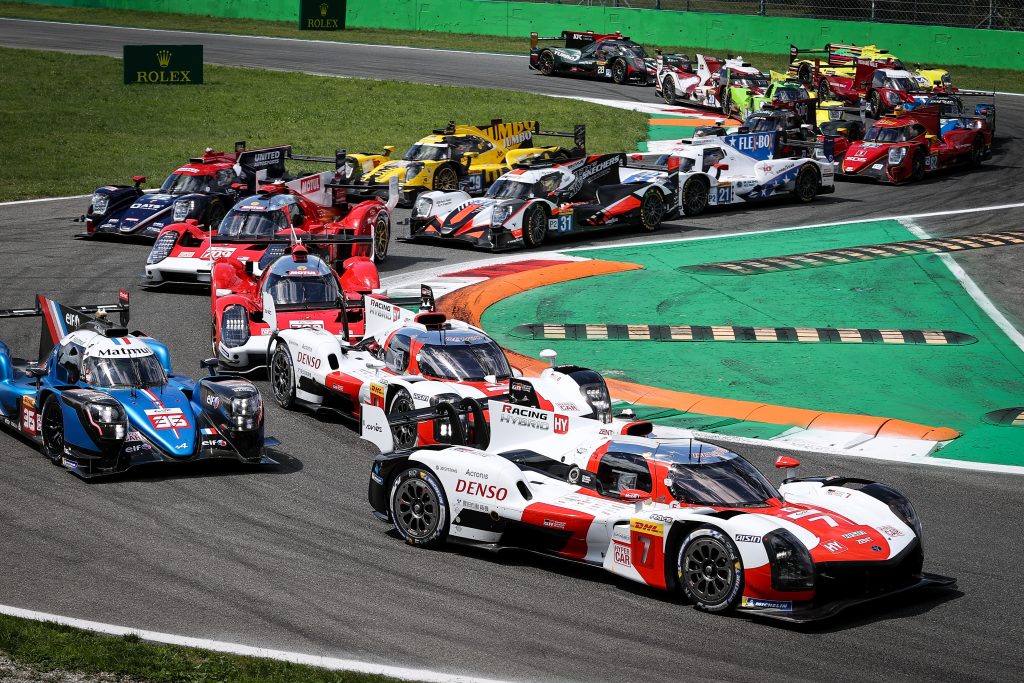 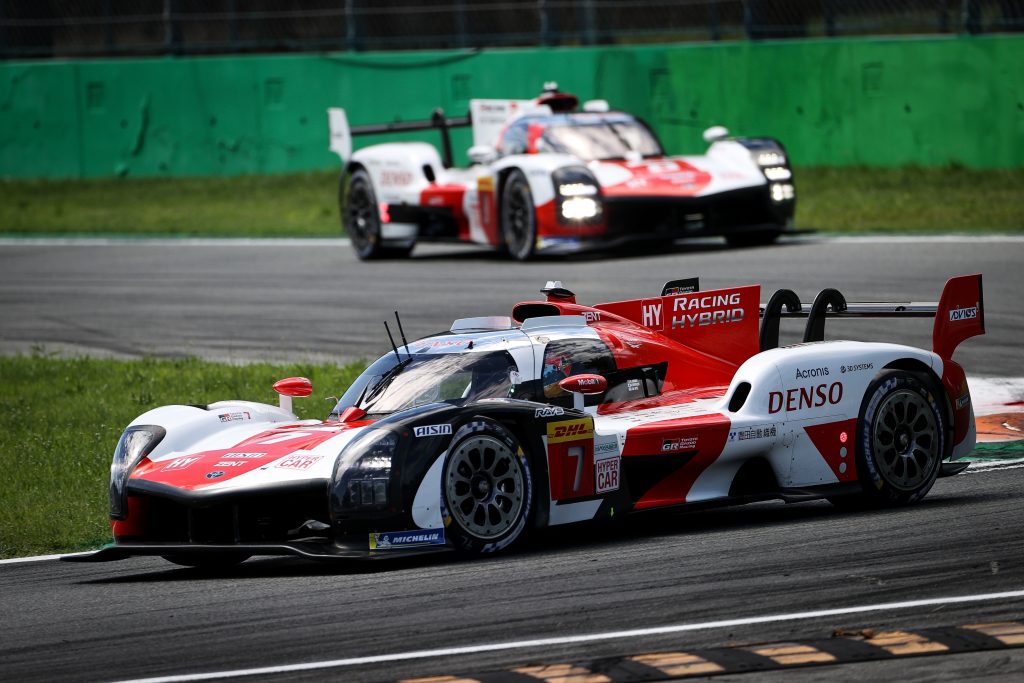 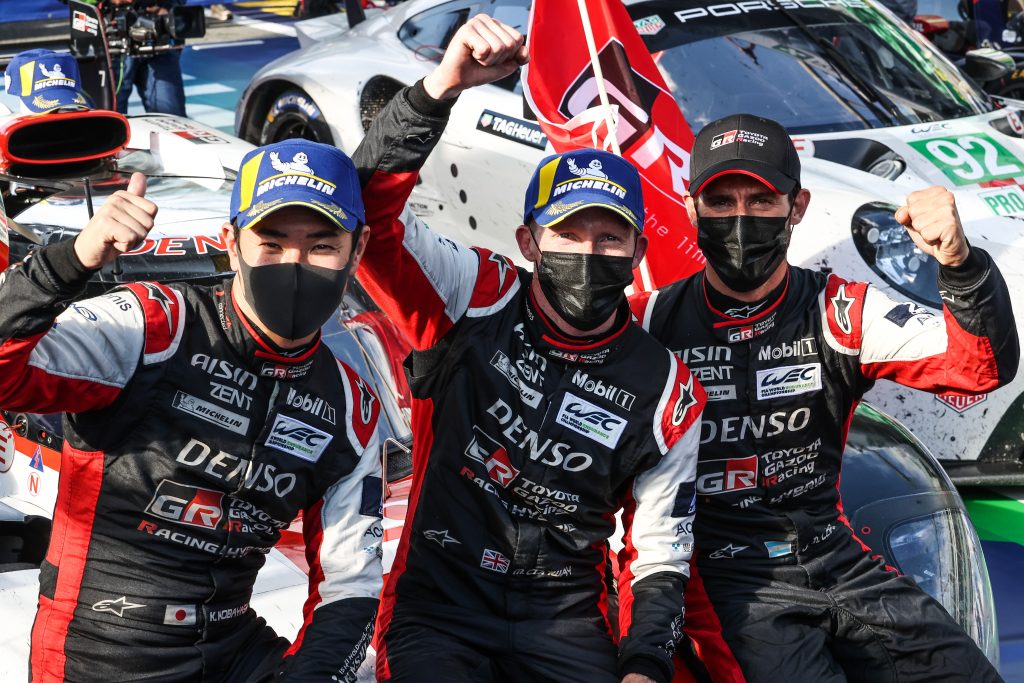