“Congratulations to car No8! Thank you to car No7 for being part of this 1-2 finish! This year Le Mans was a 1-2 race from the beginning to the end. However, the drivers could not run comfortably through the whole race. Instead, I think all the drivers drove with some stress.

From the start for 16 hours, there were no problems with both car No7 and No8, and they were competing, racing within a few seconds with each other. We were able to compete for a long time because both cars were built to the same level and ran without trouble. The drivers were also grateful for this.

On the other hand, I think it was a big burden for the drivers to have two cars from the same team competing for such a long time. I think it was really hard, but the drivers continued to fight hard. I would like to thank our six drivers.

However, after that, the fight ended because we couldn’t continue to run both cars perfectly. Car No7 stopped on the track when the race was about to start its final eight hours. Though we could re-start our race with that car and return to the track, this forced the drivers to run with the feeling that they didn’t know when the car might stop again. I feel sorry for the drivers who continue to fight despite these extreme feelings. Thank you everyone for keeping the car running until the end.

In addition, Kamui also took on the role of Team Principal at Le Mans for the first time. Instead of being distant, I heard that he went and talked to engineers and mechanics, and faced the challenges that came up from everyone. Although he hasn’t been able to communicate with all the members yet, and he also said that team building is a work in progress, I think the team is gradually changing. Thank you Kamui for working hard as a Team Principal.

But I understand as well how you felt as a driver, that you were eager to win but the result was so regrettable. You had the fastest lap, and then José took it late in the… car No7 had naturally turned into a faster car as the race went on. I wanted car No8 to secure the victory earlier, but at the same time I wanted car No7 to take the lead again… even I felt such feelings. Thank you for keeping running and sticking with the fight until the last moment.

Taking both roles as a driver and as a Team Principal can make you feel so complicated. But I think it is thanks to Kamui that our two cars could compete fairly until the end of the race. I really appreciate him for taking such important roles.

I was quite happy to see Kazuki and Kamui standing on the podium with different roles from previously.

Car building and team building are endless battles. Please continue to encourage a team feeling. And for Kamui, keep pushing as a driver.

Toyota Gazoo Racing was able to win Le Mans five times in a row. Thank you to our many, many fans and partners who continue to fight together. Thank you everyone. I really appreciate all for your continuous support.” 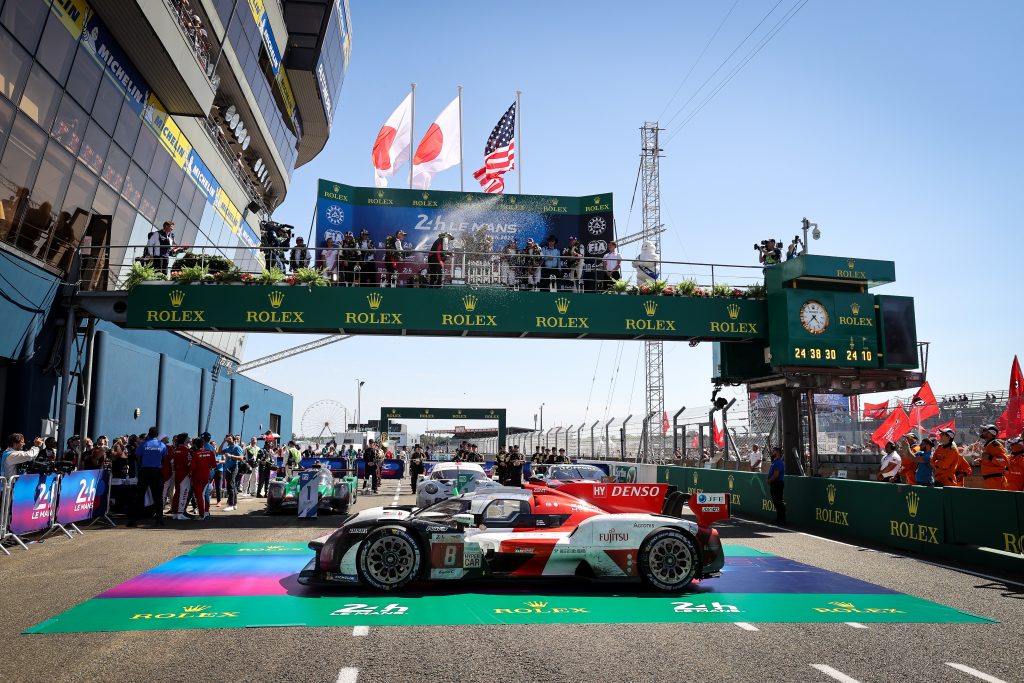