The whole team showed a never-give-up spirit to conquer a fuel system issue which threatened to derail the challenge of both cars when it struck during the second half of the race.

Mike Conway, Kamui Kobayashi and José María López, in the No7 GR010 Hybrid, finally won Le Mans for the first time after several heart-breaking near misses. The World Champions started from pole position and led for the majority of the race, completing 371 laps.

An incident-packed 24 hours began on a wet track and saw Buemi drop to the back of the field on the first racing lap, when the No8 was hit by the No708 Glickenhaus car.

Conway led the field from pole in the No7 and, despite two punctures, set the pace at the front as Buemi brought the No8 car into contention despite further misfortunes. It suffered a damaged wheel rim following contact with a lapped car and a puncture of its own.

Rain in the sixth hour caused several incidents, requiring a 20-minute safety car period, but López  kept the No7 in front as Hartley maintained the pressure from second.

The race ebbed and flowed between the two cars, with slow zones and safety cars contributing to a fluctuating gap, with the GR010 Hybrids holding a clear lead over the chasing pack, led by the No36 Alpine, which was off the lead lap.

As the race entered its final 12 hours, Kobayashi had stretched the No7 car’s lead to just over half a minute, with Hartley chasing in the sister car. When Nakajima took the wheel of the No8 after 14 hours, the team changed its front end to rectify a drop in aerodynamic performance caused by minor damage.

Nerves were stretched in the Toyota Gazoo Racing garage as the final quarter of the race approached. An issue with the fuel system of the No8 car prevented it completing full stints. Over consecutive fuel stops, it returned to the pits earlier each time as the team worked intensively to find a solution.

With four laps in hand over the third-placed Alpine, and no prospect of a quick repair, a remarkable team effort tested several options until an effective counter-measure was developed. The drivers had to activate a specific setting at defined points around the track to return the No8 car to normal stint lengths.

That proved even more crucial when the No7 developed a similar issue. Kobayashi and then López could quickly manage the situation and maintain a comfortable lead. Close communication between drivers and race engineers on both cars ensured the issue was kept under control.

Kobayashi and Nakajima took over their respective cars for the final stint and crossed the line together to make Hypercar history at Le Mans.

Akio Toyoda, Team Founder:
“To Kamui, Mike and Jose,
You have finally taken the “missing item at Le Mans”.
Congratulations! It is great to see!

Even if Toyota had three consecutive wins at Le Mans,
Even if you guys won the world championship,
I couldn’t rejoice from the bottom of my heart.

Because your guys felt only frustration at Le Mans.
It’s not your fault as drivers, Our team and cars were not strong enough.
So when I talk to you, I’ve always been full of regrets.
But you guys never blamed anyone.

How do you get rid of mistakes?
How can we all get stronger?
Think only about that and fight to win.

The No7 crew finally got to the end of 24 hours and took the chequered flag on the highest step of the podium, and had a champagne fight with a heartfelt smile.

I could finally see it, I was so happy and relieved that I could nearly cry.
Huge congratulations! Thank you so much!

I was watching Kamui when he popped the champagne cork without any trouble – just a bit too quickly! Maybe he was worried he would forget. I’m really glad that I was able to deliver a winning car.

To Kazuki, Seb, Brendon.
I think second place is a disappointing result for you, however thank you for the one-two finish. I heard that Seb helped solve the trouble on car 8, then joined car 8 driver to help car 7. Thank you to all the drivers of car 8!

But the trouble is the same that happened in the previous race, at Monza. I am really sorry to let you compete at Le Mans without fixing it.

We should give drivers a car which gives them more peace of mind and can be comfortably driven. We have to continue to improve and create ever-better cars.

I heard it was announced that 100 per cent renewable fuel would be introduced in the WEC next season. I appreciate those who are committed to the development of new fuels, making this decision, so I would like to pay tribute to you.

We are moving towards carbon neutrality through motorsport and we can make an effort to expand the options. We believe that we can speed up technological development through motorsport, because it is a place for serious competition.

A car that is easy for the driver to drive.
A fascinating race that will keep fans excited.
We will continue our efforts for various technological developments in motorsport.

To the fans,
Thank you for your support this time as well.
I would be grateful if you could continue to support us in the future.
Thank you.”

Hisatake Murata, Team President: “This was a very hard race and a real team victory, in difficult circumstances. We asked a lot of our drivers and I am amazed by their skills to implement our solution without any time loss. It was a true team effort; we never gave up and the whole team tried everything to achieve the victory. Thank you to everyone involved in this achievement; the team members, our partners and our colleagues at Toyota Motor Corporation who give us so much support. Congratulations to all the winners and to our Hypercar competitors, Alpine and Glickenhaus, who fought us all the way and showed the true spirit of this race.”

Mike Conway (GR010 Hybrid No7): “It was a hard race. We knew we had an issue on the car for the last six hours and that could have been a really big problem, but the team came up with a solution to keep us going. All credit to them for getting a one-two finish. It is really special in the circumstances. This race is never easy. Even if you are out on your own at the front, anything can happen. I want to thank my team-mates for their mega stints and hard work all the time, plus the team in Cologne and Japan for their support and hard work that made this possible. We can enjoy it now because a weight is lifted off us.”

Kamui Kobayashi (GR010 Hybrid No7): “It is an amazing feeling to be here as a Le Mans winner. We had to go through so many experiences over the years, some of them very difficult, to get here. I always knew Le Mans requires luck to win and we needed some luck today as well. We had to do a special procedure just to keep the running. We did the maximum we could do to survive for the last seven hours; it was an almost impossible job. Normally the race would end there for us but somehow we survived because the team worked really hard and made the right call. My team-mates, car crew and engineers did a great job during the week. Thank you to everyone.”

José María López (GR010 Hybrid No7): “The last Le Mans races were quite tough for us as a crew and to finally win this race is a dream come true. It is simply amazing. We came so close for so many years but, up to now, we couldn’t win Le Mans. All those experiences make the victory even more special. Mike and Kamui are like brothers to me and I have seen them doing things in the car which are just amazing. Of course, there is a strong team behind us in Japan and Cologne. We take the glory but we couldn’t do this without this team. Thanks to all of you.”

Sébastien Buemi (GR010 Hybrid No8): “I’m happy to finish second after the first lap. Obviously we always wanted to win, but this is a great day for Toyota. The first time we came here with the Hypercar and we finished first and second; that was the objective and we achieved it. I’m happy for car No7 because they deserved it very much. We had a few technical issues but somehow the team did a great job to work around it. We didn’t have any margin and we had to make everything perfect, so hats off to the whole team. I’m pleased for my friends, who came very close many times.”

Kazuki Nakajima (GR010 Hybrid No8): “First of all, big congratulations to the car No7 crew and the whole team. It is a victory for the whole team and car No8 is part of the team, so we are happy. Car No7 have been unlucky over the years and finally they won. They totally deserve it. On our car, it was challenging but we managed to bring it home despite some issues. The team found a way to manage it, so a big thank you to the engineers, mechanics and also my team-mates. It was a great race.”

Brendon Hartley (GR010 Hybrid No8): “Le Mans always brings something crazy and this year was no different. Right from the first lap we were dealing with issues. The way the team pulled together to get this one-two was phenomenal, we had to manage the issue and at one point we weren’t even sure we would get to the end. I am incredibly happy for car No7, who have had more than their fair share of bad luck. We are all really good friends and I am so happy to see them take their prize and live through all those emotions. A great win for the team.” 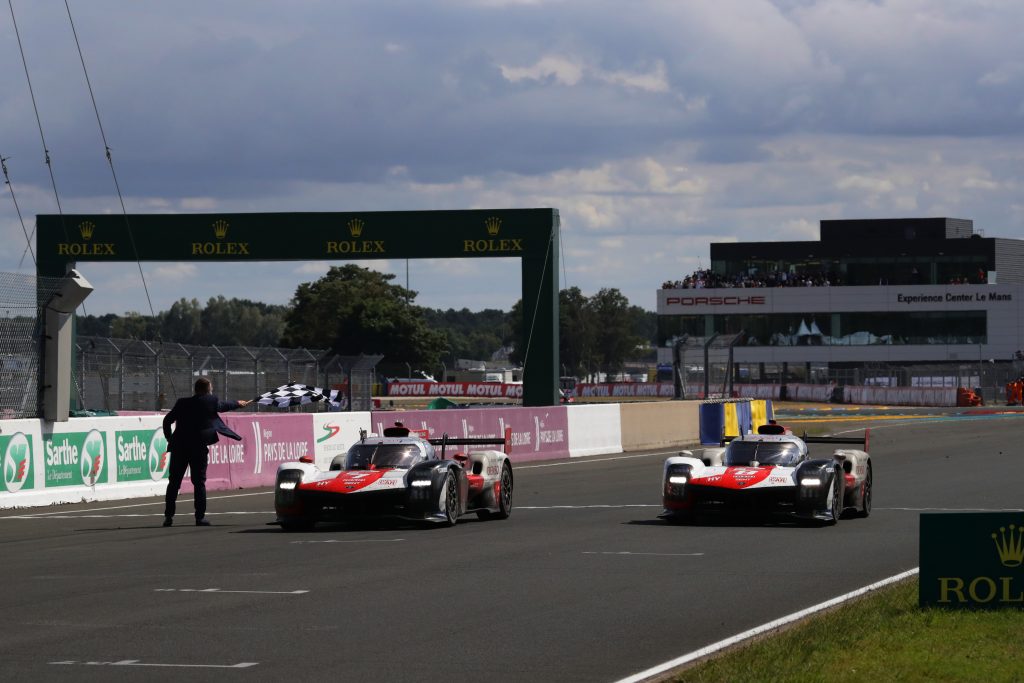 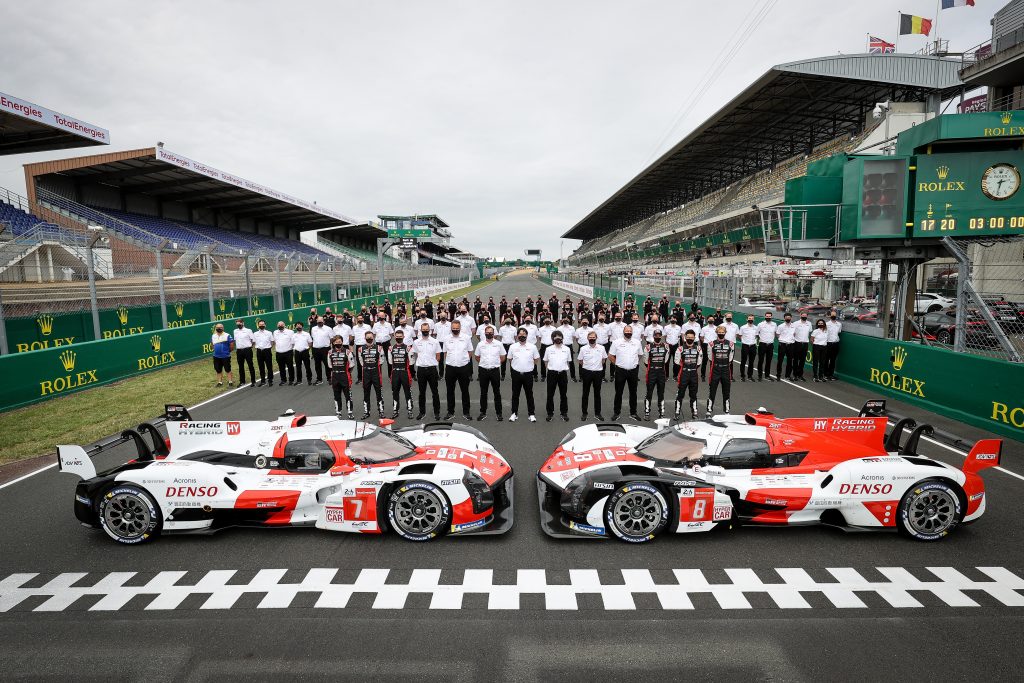 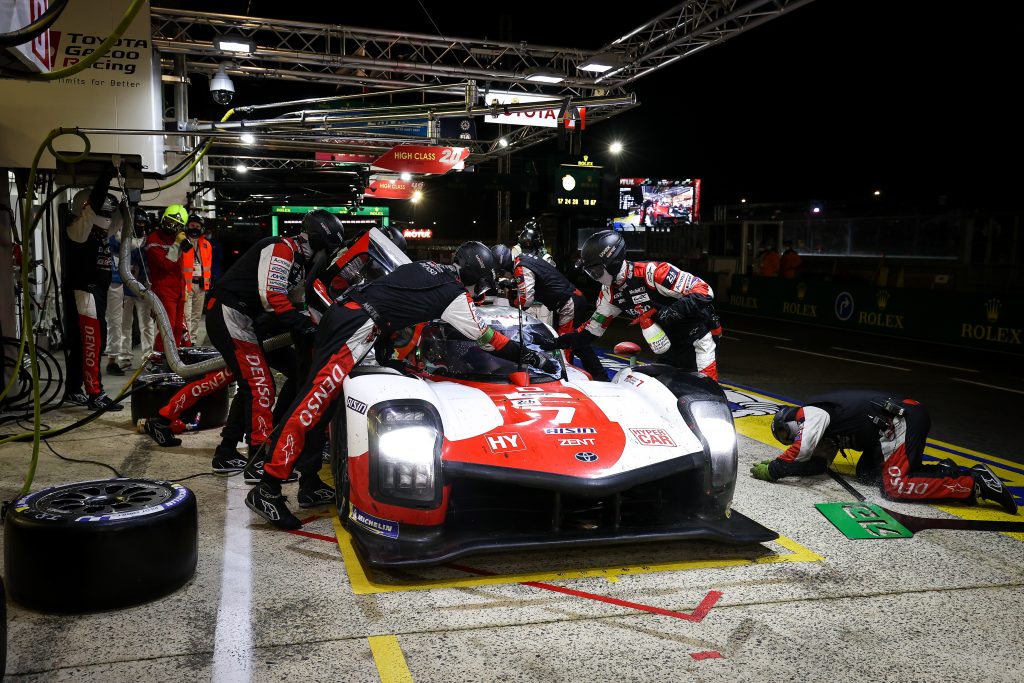 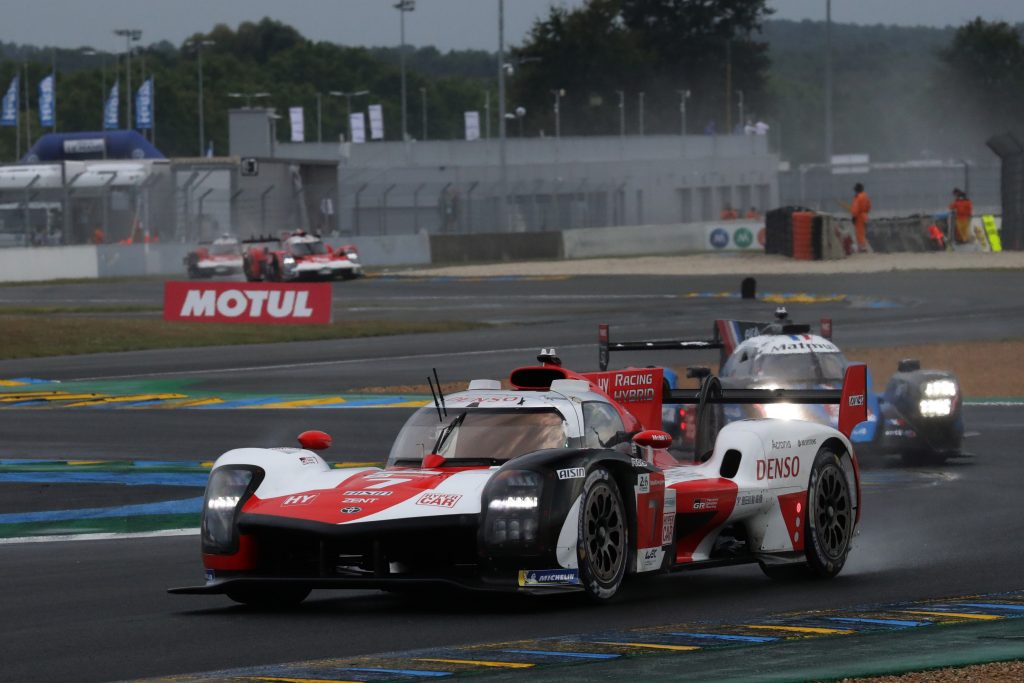 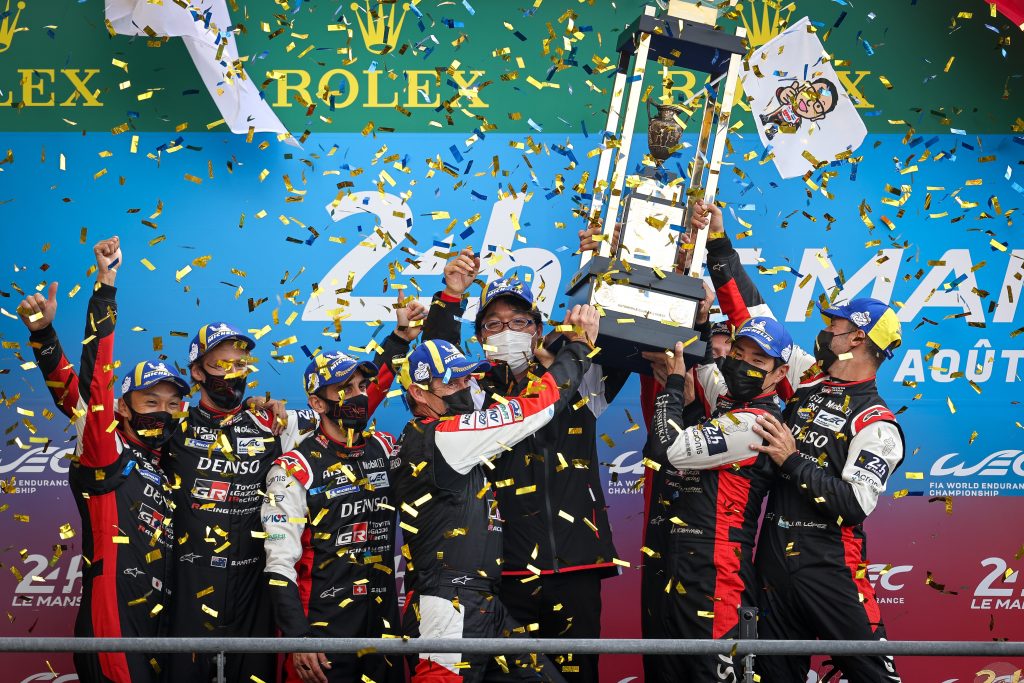 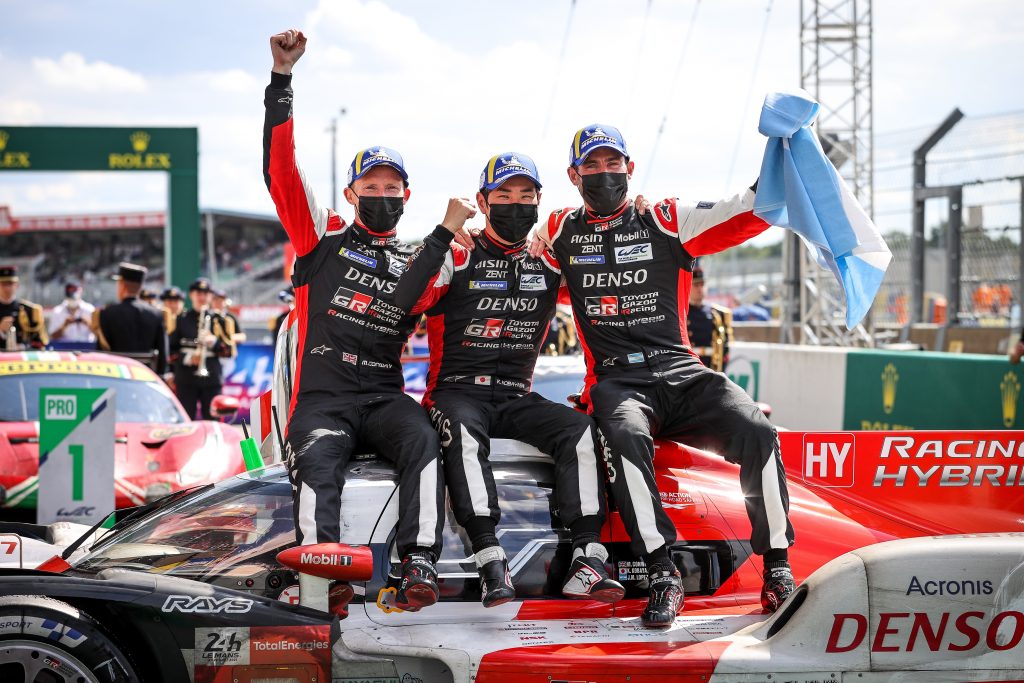 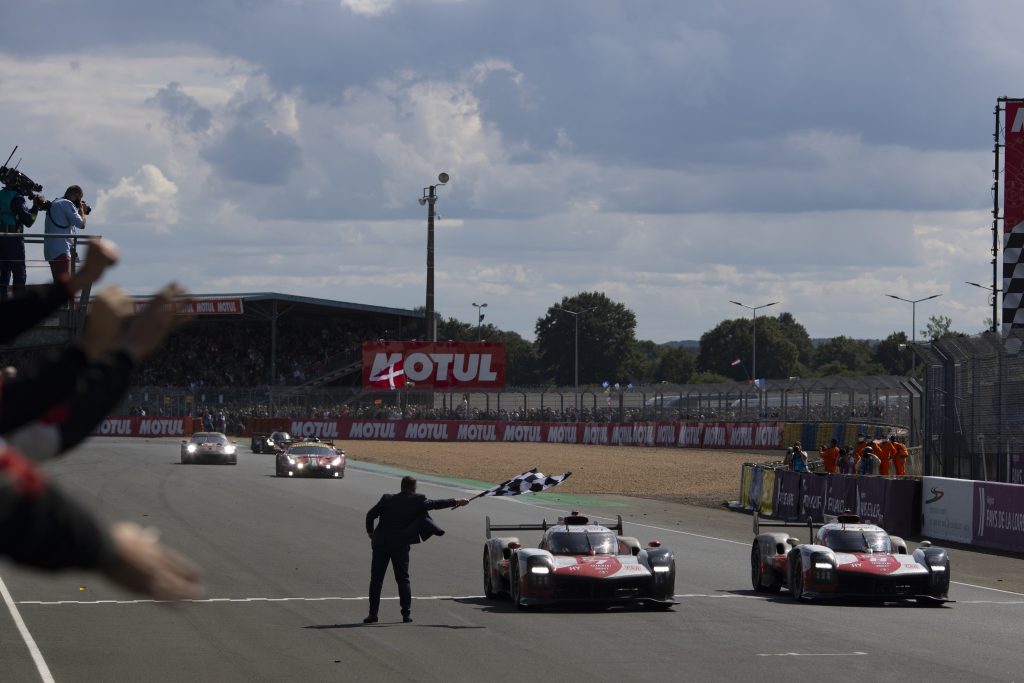 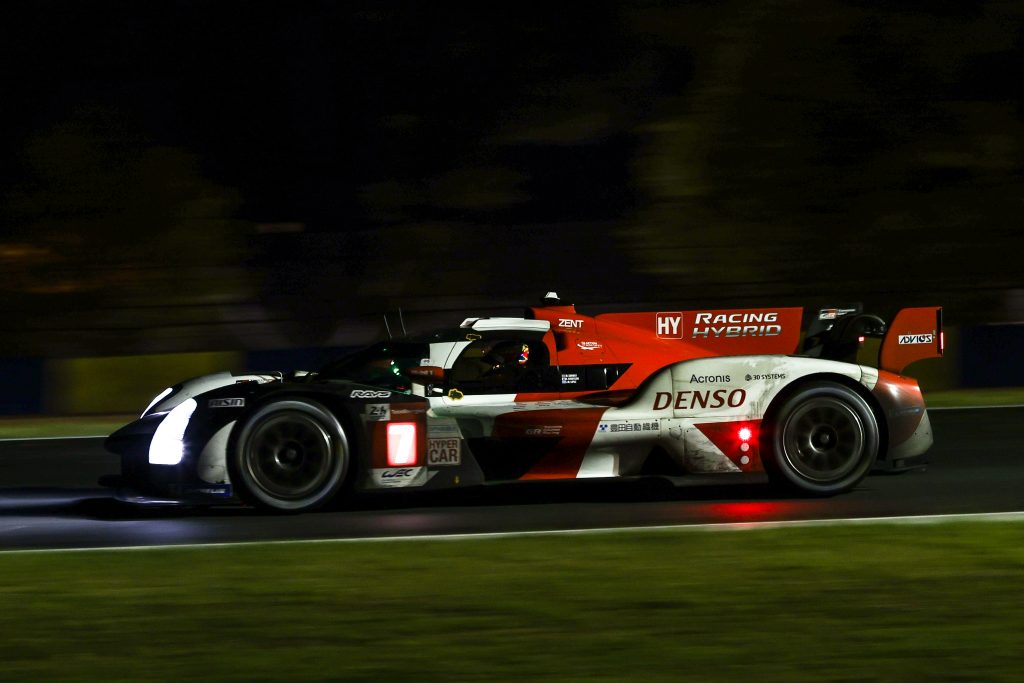 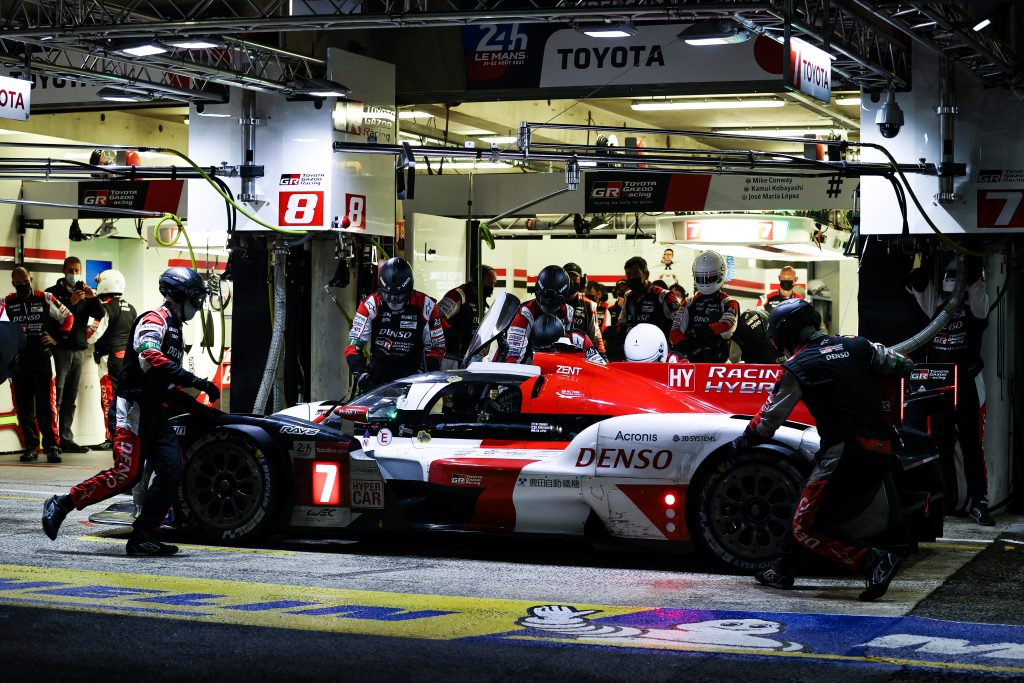